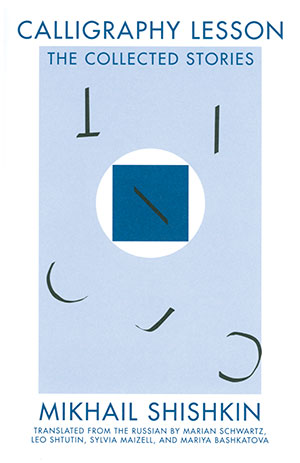 Mikhail Shishkin is a major figure in contemporary Russian literature. Calligraphy Lesson presents eight heterogenous texts, not all stories, that superbly amplify our understanding of Shiskin’s literary and linguistic preoccupations.

Shishkin has lived in Switzerland since 1995 and worked as an interpreter for the immigration service. “Nabokov’s Inkblot,” set in Switzerland, juxtaposes Shishkin’s ironic portrayal of a “New Russian” with his veneration of his Russian literary heritage. The narrator is hired as an interpreter to show Kovalev and family around Switzerland. Their program includes a stay in the room Nabokov used at the Montreux-Palace, a room Kovalev rejects because it’s too small. Kovalev opens a bank account and looks to buy a pony for his daughter while the narrator (Shishkin) can’t afford birthday gifts for his Swiss wife and child. Toward the end, the two males drink too much cognac, and Kovalev reveals his discomfort with his ill-acquired status.

“The Half-Belt Overcoat” is set in the Soviet Union in the 1970s. It recounts Shishkin’s relation to his mother, a teacher of Russian language and literature, who tried to protect her students by teaching them to not say the wrong words. At the age of seventeen, though, Shishkin’s relationship with her degenerated because she was a Communist Party member, whereas he had access to Solzhenitsyn’s texts. Having organized a cultural event for the “wrong” person, however, she was relieved of her teaching job. After falling ill, she eventually died of cancer.

This text illustrates the life-death tension central to Shishkin’s work. In resuscitating the woman who gave him life, whom he cared for in death, the young narrator discovers “life.” The story’s title amplifies Shishkin’s reflections on the life-death conundrum, for his mother once saved her young son from falling headlong into the wide gap between the platform and a crowded train in Moscow by grabbing the belt of his overcoat.

A poignant novella, “The Blind Musician” illustrates Shishkin’s universality. A young woman’s agonizing choice between two men is juxtaposed with the excruciating realizations by a blind musician that he is not an exceptional musician and that he has been abandoned by that woman right before their intended marriage.

Two essays, “Language Saved” and “In a Boat Scratched on a Wall,” relate, in lapidary form, the writer’s thoughts on language. For Shishkin, language is linked to politics. Russian literature is “the nontotalitarian consciousness’s form of existence in Russia.” It must be infused with “clarity” to repudiate the lies of the Soviet era, socialism’s “lifeless, invented reality,” and the “word corpses” of Russian television.

Shishkin’s life-affirming language posits transcendence. With his novels, Shishkin “resurrects” with language. His Maidenhair (2006) is “about there being no death,” about his cancer-stricken mother’s resurrection, about the novelist’s search for “the place where someone loves us all”—for God. “Death,” Shishkin insists, “can be overcome only by the word.”