The Alphabet of Birds by S. J. Naudé 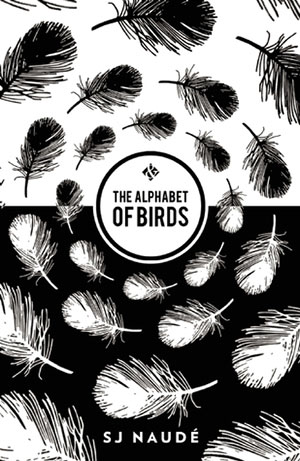 The Alphabet of Birds is a collection of seven short stories: four of them stand-alone narratives and the other three somewhat related, in that characters from earlier chapters reappear and are mentioned within the later narratives. I believe that the author, S. J. Naudé, is a natural storyteller who has nurtured a specific audience. His stories are open-ended, allowing the reader to choose her own ending. In this collection, various tales narrate the angst of characters who attempt to either lose themselves in debauchery or find themselves to create order in their dysfunctional lives.

In “A Master from Germany,” Joschka, a cocaine-snorting man-about-town, finds himself in limbo, constantly searching for his pathway through life while meandering through the lives of others. In “Loose,” the reader watches as an anonymous man describes the disintegration of his inner life and his wandering soul, attempting without success to make sense of his life and circumstances. In “War, Blossoms,” the reader, once again, encounters a man who has a fraught relationship with another. The main character returns to South Africa to look after his cancer-ridden mother, and his friend follows him, appearing to only want to help. Yet the story comes to a dead end: the mother dies, the Japanese friend leaves, and the son wanders into a shadowland of his own making.

In the four other stories the main characters are four different kinds of women: a white nurse, a white singer, two Zulu dancers, and a black hotel owner. These characters are also complex, with story elements arranged to show the difficulties women encounter in a patriarchal society. In “Van,” we see Sandrien attempting to change conditions, fighting indifference in the face of inevitability in the post-apartheid era. It is a reflection of a disintegrating marriage and of a society in corrupt disarray. In “VNLS” and “Mother’s Quartet,” the reader meets Ondien, a musicologist who has returned from Europe to perform with two Zulu women, Beauty and Nungi, as they travel from small venue to even smaller venue. In both stories Ondien is striving to find herself, a white woman in black South Africa, yet her life is crumbling around her as are her relationships with both her Zulu companions and her siblings.

These stories are intriguing. Delicately expressed, they leave many unanswered questions. There is little to identify the author or the geography as South African. The stories take place in various global locations: London, Berlin, Milan, with fleeting visits to Phoenix, London, and Dubai. The ambience is European rather than South African in essence, and apart from the occasional mention of the Free State or Johannesburg, Pretoria, or Cape Town to set a scene, the actual location could be anywhere in the world.

South African writer and playwright Damon Galgut describes the author’s voice as “something new in South African writing,” but I would have preferred to have had a clearer sense of his origin, his country, and his Afrikaans identity rather than the European ambience of the majority of the stories.