Who Is Martha? by Marjana Gaponenko 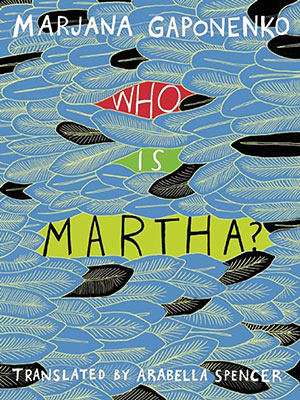 In an interview about her most recent novel, Ukrainian-born German-language author Marjana Gaponenko explained her authorial intentions, stating: “I am looking for my own romanticism and find it in the midst of reality, in irony.” Although initially confounding, this statement is a particularly apt distillation of her approach to the hilarious, beautiful, and compassionate portrait of ninety-six-year-old Luka Levadski. In the midst of a cynical age in which irony often serves to distance us from the outside world, Gaponenko sees great beauty within the curious, sometimes-uncomfortable juxtapositions that comprise life’s mosaic of realities. Her exploration of this beauty, far from alienating her readers, draws them closer to the world of life outside themselves.

We meet Levadski just after he learns that he has cancer. Unwilling to undergo the grueling process of chemotherapy, the solitary retired ornithologist considers his financial situation on the cusp of his final days and sees, with glee, his chance to live sumptuously. He accepts this opportunity with a singular energy, dressing himself up in expensive clothing and parading about Berlin like a now-genteel, now-curmudgeonly dandy. As he reflects on certain tenderly recalled moments of his childhood and successful career, however, he comes to envision his final days, not in Berlin, but in the extraordinary luxury of the Hotel Imperial in Vienna. Despite this concern with material comfort, the unlikely relationships he develops during his stay turn out to be the most vital acquisitions of his late life.

Levadski’s life is rife with irony. He is a Ukrainian Jew who spent most of his life in the nation that had put his life in grave danger. He is utterly enchanted by music and the language of birds, though he neither sings nor spent much of his life conversing. And most saliently, his life of luxury and pleasure begins as his body and mind lapse into decay. Gaponenko does not explicitly identify the tensions—between the personal and the political, life and death, inelegance and dignity, ephemerality and timelessness—underlying these ironies. Rather, their existence is revealed indirectly through the witty, quirky, and beautiful prose—exquisitely rendered in English by Arabella Spencer—with which she realizes her character’s simultaneous frustration and wonder.

The novel does not allow the historical and political to overwhelm its narrative. Nor do Levadski’s memories of the distant past take center stage. Rather, the novel and its protagonist revel in the present moment. Gaponenko’s formal freedom and pure energy reveal a love of writing befitting her subject and comprise an expression of human emotion that is as nuanced as it is powerful. Levadski marvels at how quickly those around him can become “the special people” of his life. By the end of this brief novel, there is no question that he has become a special person to the readers who sojourn with him within its pages.