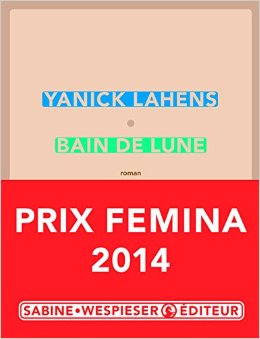 Yanick Lahens’s Bain de lune chronicles the history of a family in rural Haiti over four-plus generations. Tertulian Mésidor’s ardent stare at sixteen-year-old Olmène, sitting beside her mother at the fish market, initiates the plot. With cinematographic close-ups, Lahens records the sighting of the young peasant girl by the community’s most powerful don, a fifty-five-year-old man whose family had forced the sale of her family’s land and killed the seller besides. The object of Tertulian’s desire yet aware of his reputation, Olmène, and her mother, are nonetheless impressed by the virility of the man on horseback. Moreover, he buys all their wares.

Mésidor’s stare, the prelude of forceful possession, determines Olmène’s destiny, the inevitablility of which she accepts. Subsequently, under the mapou tree, her father discusses the terms of the union with Mésidor. She gets a cow, new shoes, and a house that doesn’t leak. There is no coumbite as Tertulian has the house built by his men. Olmène, aware the profligate man who impregnated her is married, gives birth to Dieudonné five months after settling in. After learning Tertulian participated in an unarmed peasant’s murder, however, Olmène, alone, unsubmissively leaves her family in Anse Bleue and never returns.

The family’s subsequent disintegration is embedded, more overtly, in twentieth-century Haitian history. In 1962 the local representatives of Haiti’s strongman in the capital, the man with a black hat, started assuming power in Anse Bleue, and even Mésidor allies himself with them in time. The power shift clearly affects the family since Olmène’s brother joins Duvalier’s militia. With the fall of Duvalier, the village will take out its wrath on militia members while, alerted, Tertulian crossed the Dominican border at night dressed as a woman. The Party of the Destitute then takes power, but Anse Bleue seems little changed.

Lahens orchestrates her chronicle using two narrative voices. A third-person narrator relates the principal narrative thread. The frequent insertion of the pronoun nous tells us a villager observed, to cite an example, the interaction between Olmène and Tertulian. The novel opens and closes, though, with a first-person narrator whose thoughts are italicized. Those chapters are the musings of Cétoute Olmène Thérèse, Dieudonné’s daughter and the granddaughter of Olmène. Cétoute regrets never having met her grandmother, with whom she feels a mysterious kinship.

Cétoute adds a subjective, feminine vision to the history determined by men. Through her we see the force history and invisible divinities exert on the family. Like her grandmother’s infatuation for Tertulian and the former’s possession by Erzuli Fréda, Cétoute is enthralled by Tertulian’s grandson, who has returned in a new car to reclaim his family’s property. The violence she endures parallels that of Olmène although Cétoute returns to Anse Bleue.

Lahens’s ambitious fresco of twentieth-century Haiti through the eyes of peasants depicts the first generation with Romain-like incision. The portrayal of the subsequent, historicized generations seems rushed, perhaps because of the expansive time frame.