The Novel: A Biography by Michael Schmidt 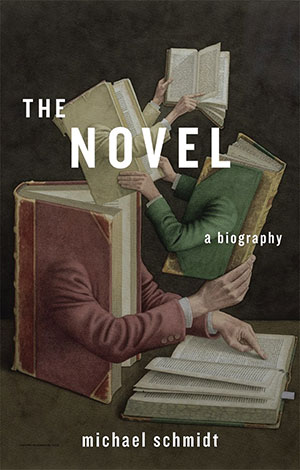 With neither footnotes nor endnotes nor a lengthy bibliography, Michael Schmidt’s 1,172-page study of the novel in English is not for specialists digging for secondary sources. With a timeline and an extensive index of authors, however, the book should appeal to general readers interested in the sheer variety of and interplay among authors and their novels.

My copy displays two titles: The Novel: A Biography on the cover and title page, making it official, and A Life of the Novel along the hardback spine. Schmidt disclaims any master theory or strictly chronological order, grouping short biographies and books into chapters by technique or theme. For instance, Aphra Behn is placed with Zora Neale Hurston in “Enter America.” He is interested in kinships, how authors influence, extend, and react to one another, in order to determine their literary “families.” Given forty-five chapters of different families, the book could be titled Lives of the Noble Novels, if the novel weren’t so egalitarian.

Schmidt historically analyzes origins, up to chapter 4. Afterward, only the first authors in each chapter maintain a chronology, although some chapters contain groups living in a certain period or region. Chapter 6, “Impersonation,” starts with Daniel Defoe, linking him with Truman Capote and J. M. Coetzee (who wrote Foe). Only two writers—John Bunyan and Laurence Sterne—get their own chapters. The later chapters, treating late moderns and contemporaries, show the difficulty in achieving critical distance, packing many writers in what may be temporary shelters, until Time and Taste sort them out. Or a race, as in “Win, Place, and Show.”

In any survey, readers are bound to be disappointed with omissions or scant coverage of their favorites, chafing at the extent others are treated. Some will fault inclusion of such popular genre authors as Raymond Chandler, James Cain, Isaac Asimov, and

Schmidt favors authors as commentators, too, his own remarks joining the conversation with them. Certainly some “family” groupings are unexpected. Who would have thought that Malcolm Lowry was so neighborly with Thomas Wolfe in the “Elegy” chapter? But one does see commonality in their unleashed prose (needing an editor) and the theme of the suffering artist. Earlier, that chapter seems to violate one of Schmidt’s guidelines against strictly geographical grouping, when that great locomotive of modern southern writing—as Flannery O’Connor once called Faulkner—leads a train of his southern compatriots, including O’Connor. Granted, they did not suffer by following.

The Novel: A Biography is well conceived and superbly written. My bookmarks indicate five different pages that I will go back to. I recommend Schmidt for all those on the hunt for something new or perhaps just a novel like a novel you liked.