Where Are the Trees Going? by Vénus Khoury-Ghata 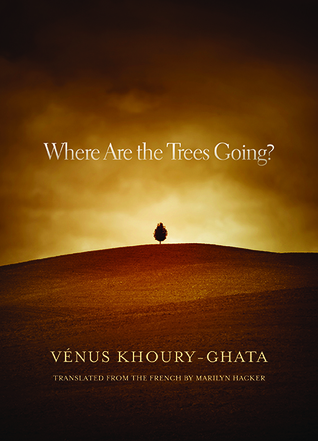 Born in Lebanon, Vénus Khoury-Ghata has lived in France since 1972. She has published forty books of novels, poetry, and translations, which earned her the 2011 Goncourt Prize for her entire body of work. Four volumes of poems have appeared in English since 2000 thanks to talented fellow poet and translator Marilyn Hacker. Where Are the Trees Going? was crowned in its French version by the 2013 Pierrette Micheloud Poetry Prize. The English version contains selections from two prose volumes; several of its poems have appeared in print and online in British, Lebanese, and American literary magazines, sometimes in different versions. The prose excerpts constitute a canvas that helps organize the poems into polyphonic threads.

Khoury-Ghata’s rhythms are part lullaby and part incantation: “If one moth left the lamp the evening turned to night / The mother put us to bed head-to-foot with trees the same age as ourselves.” Objects, trees, humans, wind, or water perform each other’s tasks and adopt each other’s characteristics. Children “put noises away in pencil cases”; the dead must resettle “each time the lease on the burial plot ran out”; an abandoned child “would liquefy as soon as a snowflake touched the ground / We could hold out till Epiphany . . . / waiting for a redistribution of parents.” This upside-down reality moves between memoir, autofiction, and imagination, life and after-death.

Evoking the Arabic, Aramaic, and Syriac languages “rough as the noise of stones rubbed together,” Khoury-Ghata chronicles the long agony of Lebanon since the 1970s: “We lived on a land another land had replaced / Only the countryside’s outlines belonged to us.” Houses are overcome by air, walk into the sky, live in the woods, and host clouds and rain. Ultimately, they disappear, leaving nothing but “memoirs written by sleep that sleep erased.”

Trying new keys to unlock reality, or to survive, humans exist in symbiosis with trees: “When did their language mingle with ours / so my brother spoke the words of the arbutus / so the mother thickened her sauces with the ash tree’s black resin.” Children “changed our appearance with the seasons / grew mildew and bark / October sharpened us / December transformed us into rust stains on the houses’ hips.” The gardens “came into our house inadvertently / multiplied their branches in our mirrors / burned their trash in our hearth.” Family relationships are equally symbiotic. The father flushes the children into the gutter and drowns the mother, leaving her “disjointed like the old street’s paving stones / her voice banging against the sink where she scrubbed the blood from the earth.” The children reciprocate: “We opened the mother but forgot to close her up again.” They return as pebbles to the dying mother’s womb and unmake and remake the dead mother “according to the puppeteer’s instructions / from storm- and grief-resistant materials.”

Taken together, these stunning, at times surrealistic poems amount to an elegy of survival that takes the reader to new ontological depths.