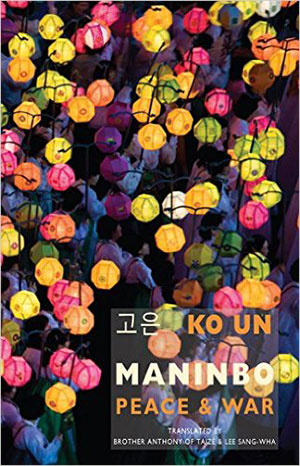 Imagine: a young man is forced into compulsory labor while the civil war that rages around him kills millions of his compatriots; when the conflict concludes, he spends the next decade a Buddhist monk, turning his back on the world; returning but filled with despair, he lurches toward alcoholism then suicide; he fails (several attempts) but is energized by a surging democratization movement and becomes a leading dissident; over two decades he is imprisoned four times for parapolitical activities; he is accused of treason and sentenced to twenty years in prison, where he is tortured and beaten; he is pardoned, eventually, and becomes a father at fifty; all the while, prodigious numbers of his books are published—over 150 at last count—including the sprawling, thirty-volume Maninbo (Ten Thousand Lives, 2005), which is, the poet tells us, “a collection of songs about the people I have come to know in this world.”

The Bloodaxe edition brings new translations from volumes 11–20 into English, and these focus “on the sufferings of the Korean people during the Korean War”; to Ko Un, this was a conflict that stole: “the clarity in the eyes / Of people in autumn’s cool wind. / Gradually, / Not only the eyes of people / But of cows and horses in the stony fields.”

The poet describes his oeuvre as “popular historical poetry,” and the more than two hundred poems in this book are each marked by moments of trauma; populated by students, doctors, jailers, drunks, dignitaries, dictators, rapists, rightists, leftists, police spies, dogs, refugees, daughters, et al., this book enumerates the human costs of ideological displacement endured by Koreans across the twentieth century. The poems are, essentially, elegies: “Since Liberation, Korea has been a land of blood. / Every single nook and cranny of our whole peninsula / Has become a cursed place . . .” And so this volume serves as a testimony, a monumental feat of remembrance memorializing the lives of ordinary people interrupted by extraordinary events.

Musing on an earlier English-language translation of Maninbo (volumes 1–10, published by Green Integer in 2005), Robert Hass recalls a comment from Czesław Miłosz: “Woe to the poet born to an interesting piece of geography in a violent time.” Striding across the Korean peninsula, Ko Un is a literary giant once described by Allen Ginsberg as a demon-driven bodhisattva. The poet suggests, “A home is a grave on a hill buried in the heart”; resettling domains of erasure and disappearance, Maninbo: Peace & War single-mindedly protects these human stories from the darkness of forgetting.