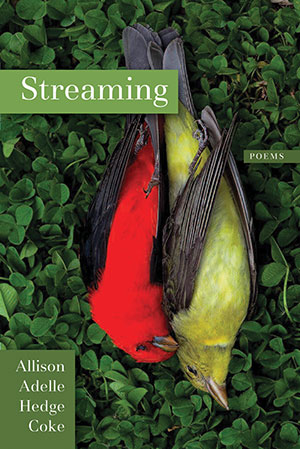 Beginning with her first collection, Dog Road Woman, Allison Hedge Coke announced herself as a poet of sound and image whose themes—Native American life and history, colonialism, the earth and its flora and fauna, labor and working-class issues, a fascination with science—would sustain her writings, both poetry and memoir. Streaming continues Hedge Coke’s thematic journey while, at the same time, revealing to us a mature poet of imagery whose sonics have shifted toward a be-bop poetics in which rich, complex sound-patterns are essential to the collection’s meaning-making and emotional impact.

A recording of several pieces from the collection made with Rd Klā, a three-piece jazz/fusion ensemble that includes the author, underscores the importance of music to the collection’s amplitude. The recording is free to those who purchase the book. Like be-bop, Streaming does not so much inspire dancing (although the use of rhythm and repetition are among the tactics at work in the collection’s sonic strategy) as it does close listening.

A reader could open Streaming to any poem, close her eyes, point to any section on the page, and find a sonically complex passage. In fact, the overall effect of Streaming is layered sound or, to jump musical genres, a “wall of sound,” a synergistic weaving greater than its parts. Trying to capture that effect in a small quote is difficult, but, as an example, here are a few lines from “We Were in the World,” a prose poem: “Once, some alphabet believers, glass purveyors, Ursus Arctos killers, sent all bailiwick on cursed course far faster gyration backspin, billing intrinsic angular momentum—boson melts. Spinning, it careened away iceberg, iceberg iceberg; glacier traded time traced yesterday, unshakeable base—all below flushed alluvium torrent.” To get the full effect of this passage, one should read it aloud. Sibilant “s” sounds bounce from one hard “k” or “t” to another, like spinning subatomic particles excited by an accelerator.

This passage also suggests the epic dimensions of Streaming. The breadth, the depth, the historical and cultural reach, and the preternatural musings of the collection as a whole demand it be read as an epic poem, both in the sense of heightened language and in terms of its ambition.

Two long poems, “Burn” and “Streaming,” both of which are “mini-epics,” are placed in structurally equivalent positions in the collection. “Streaming” is the second poem in the collection, following the “Prelude,” an elegy for the poet’s mother (the invocation of her mother as muse?). “Burn” is the penultimate poem, followed by a “Coda” entitled “Harp Strings.” “Streaming” also makes use of refrains, which, when thinking of the collection as an epic, have the feel of strophe and antistrophe, especially when at the end of the poem they are combined into an epode.

Despite its epic structure, Streaming is a lucid, intimate collection, one in which the heroes and the villains are people we know, where a butterfly and a wildfire take the place of the gods.