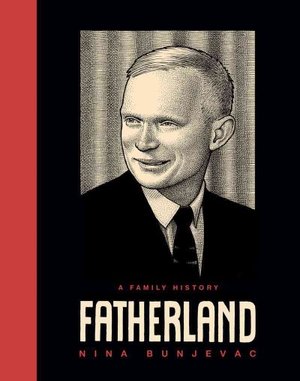 Why did Nina Bunjevac’s mother, Sally, take her two daughters to Yugoslavia in 1975, abandoning her husband, Peter, and oldest child, Petey, whom Peter refused to let go? What explained her father’s death at forty-one in a Toronto garage while building explosives with two fellow saboteurs in 1977? Winner of the 2015 Douglas Wright Graphic Arts Best Book Award, Fatherland documents this Canadian-born artist’s quest to fathom her family’s tragically fragmented history.

Part 1: Plan B takes place in Nina’s Toronto apartment in 2012, as Nina plies her anxious, repressed mother with questions. Sally reluctantly narrates a tale of growing paranoia as her abusive husband drinks too much and hides his secret life as a Serbian terrorist. Sally’s mother, Momirka, a former partisan loyal to the values she fought for, visits Canada each time Sally gives birth, clashes with Peter’s associates, sees their potential danger, and prods Sally to escape with her children. As tension mounts at home, Sally executes “Plan B,” a fabricated “visit” to her parents in Yugoslavia.

The telegram announcing Peter’s violent death follows Momirka’s dream about crows. Presaging dark news, these constitute a leitmotif in part 2: Exile (Childhood; The Dissident Years; Exile), one glaring from the final page. In this section, Bunjevac’s research amplifies Sally’s sketchy responses. Exposed to the horrors of World War II as a Serb living under Croatia’s pro-Nazi Ustaša, which targeted Serbs for conversion, expulsion, and death, Peter becomes a troubled, sadistic child. His father enlists in the royalist Chetniks and dies in Jasenovac, Croatia’s largest concentration camp complex. Tuberculosis kills his mother, his grandparents send him to military school, and he later joins but runs afoul of the army, illegally fleeing to Canada.

Hardworking, lonely, Peter courts the young woman he has chosen as his pen pal, Sally, who moves to Canada a year later. They marry in 1959 and start a family, but their lives shift drastically when the local branch of an international Serbian terrorist organization claims his attention. Momirka’s visits underscore Peter’s aberrant behavior, while Sally’s growing terror convinces her to leave Canada. Alone with Petey, increasingly trapped in his politics, Peter attempts suicide. When Sally mandates that he choose between his family and his cause, he writes that he would do anything for his family but is “too deep in shit” to extricate himself.

Unlike Satrapi, Sacco, and Spiegelman, Bunjevac approaches realism in her graphic art. Crosshatching and pointillism produce frames that resemble family photos: form mirrors content. Her objectivity welcome in a field rampant with bias, she shapes her memoir like a Matryoshka doll, her family’s story the frame holding histories within histories of the “fatherland” to which she lost her father—its violence during World War II, its tribal origins, the subsequent colonial incursions that carved one culture into sharply divergent ethnicities, and Tito’s reign. Ultimately, Fatherland’s heavy, black-and-white, pain-filled pages document the human cost, the “collateral damage,” of those warring ideologies and competing dreams of “home” that still persist within global diasporas linked to ethnonational conflicts.