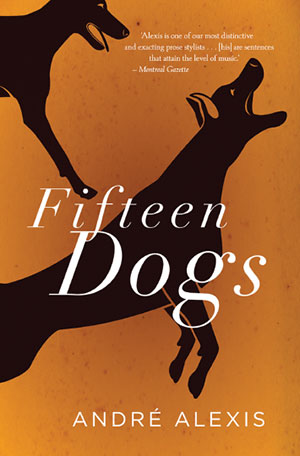 Canadian writer André Alexis invents a modern Greek mythology in his 2015 novel Fifteen Dogs, bringing together prose and poetry, consciousness and animal instinct, humans and dogs. In a narrative that questions the righteousness of humanity, Alexis frames his novel around a disagreement between Zeus’s two sons, Apollo and Hermes, who argue about whether or not animals would be happier with the intellectual capacity of humans. Arguing over what sets humans apart from other animals, the gods settle by granting fifteen dogs the presumed gift of human intelligence. In posing the question of whether animals would die happier with the capacity of human consciousness, Alexis provides a bleak yet revitalizing tale of human mortality and the gift, or curse, of superior intelligence.

As fifteen dogs in a kennel in Toronto suddenly awaken to a world full of color and an unfamiliar sense of awareness, readers are taken through the journey of what it might be like to live as an animal with a human intellect. Being suddenly much more aware of their environment, social stratification, and effect on others, it becomes clear early on that the capacity for human intelligence entails much more than the ability to think logically. Although the superiority of their newfound intellect proves beneficial for the dogs in many cases, the burden of human consciousness arises as an ever-present and oftentimes destructive factor in the novel. While Apollo and Hermes constantly argue over the relationship between intelligence and happiness, the dogs face betrayal and loss of loved ones, continually fight over power and positions in the pack, and experience a new type of fear: of the world and humanity. Despite the burden of consciousness and social awareness that the dogs’ human intelligence brings them, there is a welcome reassurance as Alexis’s fifteen dogs discover the beauty of language, love, and human generosity along the way.

Fifteen Dogs proves its brilliance as the dogs encounter much more than conflicts imposed by conscious awareness but individual, emotional, and uniquely human experiences. Despite the self-serving, pretentious, and unfavorable aspects of humanity that this text uncovers, Alexis leaves readers with a glimpse of our better nature, as the dogs experience some of our species’ most exceptional qualities: the ability to communicate, connect, and learn from one another.

André Alexis’s fifteen dogs discover much more than human intellect in this novel: a consciousness deeper than intelligence, love different than loyalty, compassion unique to humanity, and a new perspective on the world.