The Pomegranate Lady and Her Sons by Goli Taraghi 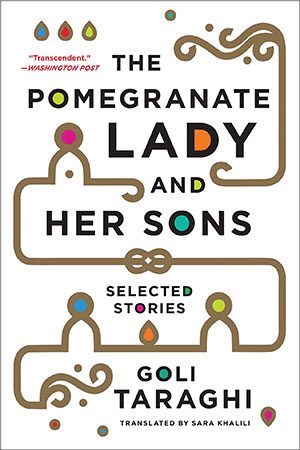 Goli Taraghi, a renowned Iranian female author, now in her seventies, has lived in Iran, the US, and France and has written and published both before the Islamic Revolution of 1979 and after. Her latest collection, published in English, The Pomegranate Lady and Her Sons, includes ten short stories that cover various moments and eras in the span of her life, taking place in Tehran, Paris, and other cities in between and beyond.

These stories seem to be mainly based on either Taraghi’s own life or on other women she has met throughout her life and journeys. Some of her themes include three generations of women, a thief, a ballet class, neighborhood young loves, a coup d’état, grandmothers, the intertwined lives of maids, nannies, and their employers. Of the stories in the collection, only three are primarily about male characters; interestingly, they are entitled “In Another Place,” “The Great Lady of My Soul,” and “The Other One,” and even these are, in one way or another, stories with a female center.

Taraghi writes of the world around her, allowing her to indulge herself and her readers in the well-represented familiar world but limiting her ability to take her readers beyond her immediate surroundings, beyond her social class and lifestyle. Her stories are strongest when she delves into (re)creating a world with its events and characters, and when she stays within the bounds of simple storytelling, rather than trying to use intricate plot devices that might be more harmful than helpful to the story. On another note, the stories are not the strongest with regard to rhythm and pacing, tone and voice, as these do not change much from one story to another, from one context to another.

Goli Taraghi is a storyteller who reminds you of a grandmother who gathers her grandkids around her at night and tells stories of a life, a life wished for and gone by, struggled for and let go of, remembered and recounted. Her stories are simple and accessible, yet they revive peoples who are not simple and accessible. Her stories are happy, hopeful, and humane while simultaneously sad, dark, and heartbreaking. Without any forced gestures, they invite you to sit, listen, imagine, and think about these lives. It is for these very reasons that the collection, although not a complex one for readers looking for plot intricacies and formal artifices, can still serve as an enjoyable read introducing its audience to a slice of Iranian life and literature across governments and geographies.