This Day: Collected and New Sabbath Poems by Wendell Berry 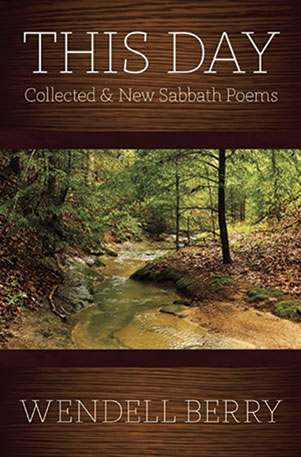 This Day is a collection of poems written by Wendell Berry on Sunday walks in the woods and grounds of his farm, spanning (perhaps not coincidentally, given his Christian faith) thirty-three years, 1979–2012. In his beautiful introduction, he explains that he sought “a lovely freedom from expectations” in which his mind would become “hospitable to unintended thoughts” and that he was just as happy when the poems didn’t come. “To be quiet, even wordless, in a good place is a better gift than poetry.” The introduction then proceeds to express Berry’s thoughts about the natural world and our current relationship to it. Sometimes orthodox, often unorthodox and even heterodox, Berry’s relationship to Christianity, to nature, and to society is unique, truly individual, and authentic. His introduction signals to the reader to grow quiet and release expectations during the next four hundred pages of poetry, a length that might initially daunt some readers but which soon becomes as amiable as a woodland path leading to immersion in the flow of nature and ultimately one’s own thoughts.

In an early poem from 1979, we read: “the mind / That comes to rest among the bluebells / Comes to rest in motion, refined / By alteration . . . The mind that comes to rest is tended / In ways that it cannot intend.” This willingness to be led, taught, and restored by nature reveals a powerful kinship with Wordsworth, a kinship not only in a shared reverence of nature but also in religious conviction. Berry’s Christianity, however, is not interested in the dichotomy of spirit and material but, instead, in the incarnate wholeness of life. Seeing our current uncaring and exploitative relationship to nature as deeply damaging to its incarnate wholeness and to ourselves, he explicitly indicts industrialization as it is currently practiced and stands alongside Thoreau as a voice of dissent—that is, Thoreau and various contemporary agricultural and ecological scientists, some of whom he credits in his introduction.

The poems themselves, however, take us far beyond stance, dialectic, and belief. Yes, we hear strains of influence (Frost, Roethke, Shelley, Eliot, Stafford, and others), but we also hear the distinctly quiet whisper of the natural world somehow manifest originally in Berry’s poetry, “like a summer rain falling / slowly, quietly in the dark.”

Berry’s poetry can sometimes be dilated and conversational in style (e.g., “A man with some authentic worries / And many vain and silly ones, / I am well-schooled in sleeplessness, / I know it from the inside out”). Various passages and poems throughout the collection contain such frustratingly diluted language. In this way, this collection may resemble those of William Stafford in their unevenness; however, as with Stafford, we soon realize we must have it all to have the whole man, and such passages are always redeemed by an eloquence and quiet grace just a few lines later: “There is a day / when the road neither / comes nor goes, and the way / is not a way, but a place.”