Church of the Adagio by Philip Dacey 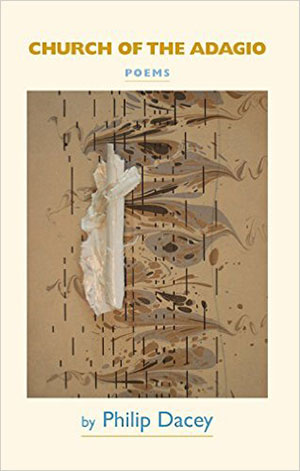 Philip Dacey, in his fourteenth poetry collection, includes poems published in over forty journals or anthologies. Sixty poems are divided into three sections, plus an essay about the cover art, Symphony I, by Barb Skoog and Rebecca Tager. The poems vary in form and cover all art forms. The poet finds ideas for poems everywhere, surprising and delighting the reader.

Part 1, “Walking My Llama Back Home,” includes sonnets, villanelles, rondeaus, and a calendar poem as well as free verse. He is playful in “The Abyss Variations,” a sonnet personifying the word “abyss” and using its variations abbess, abysmal, and, as a name, Abyss. In “Sourdough Ennui,” he alludes to Baudelaire’s ennui and to E. B. Browning: “How bored can I get. Let me count the ways.” He is inspired by classical music, sex, and his Catholic background (like “Wings,” about an abandoned bra he finds on a bench in the park, a sure “first sign of spring”; or “Windfall,” with an allusion to Adam and Eve in paradise, with couples making love outside and eating apples), and he realizes that Irish Catholics are perceived as white trash and that he is “the Other”: “When the middle-class blacks / moved into [his] family’s neighborhood / in St. Louis in the fifties . . . [and the whites] moved out, the property values / soared”).

In “Honey Emergencies,” part 2, the strongest and most diverse section, with twenty-three poems about poets (Ginsberg, Lorca, Whitman, Stevens, and Dylan Thomas), about art (Chagall, Velázquez; Eakins writing home about seeing a Velázquez at the Prado Museum in Madrid), about music (Bach, Brahms, Dorsey), about dance (Nijinsky), philosophy (Voltaire, Freud), and, again, about sex. He tells us about Ginsberg’s weird reading prep and how talking to a dead father-in-law at his graveside reminds him of Chagall’s floating angels. He learns that Bach’s birthday falls on the first day of spring and about his aunt who died a virgin at fifty-one. These poems include free verse and formal poems such as pantoums, epistolaries, dramatic monologues, a sestina, a catalog on sex cookies, and an ars poetica.

In the final section, “Invitation to the Cockroach Ball,” he continues with the forms, adding a triolet, a ghazal, a cento sonnet, a blues poem, a villanelle, and ending with an elegy. This section contains numerous poems about music at Julliard. Others include a poem about flights and airport security, about William Stafford’s ghost in New York City, a poem about how he would like to die, and dreaming of sainthood as a Catholic child.

He never runs out of ideas and finds inspiration in the most unlikely places. His playfulness with language, careful craftsmanship with form, witty line breaks, endless figures of speech, and allusions to artists and their works make us wish for more of the same. These poems will more than satisfy anyone who appreciates and loves all kinds of art.