Exhausted on the Cross by Najwan Darwish 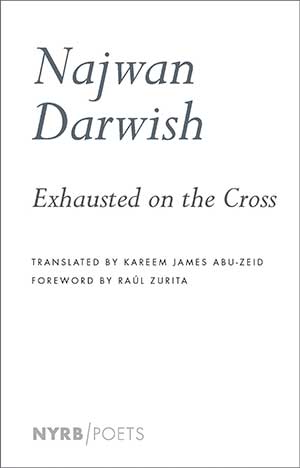 IN NAJWAN DARWISH‘S unflinching new collection of poems, Exhausted on the Cross, we witness a poet in conflict with his calling, conversing with bards across the ages as he struggles with the burdens of his craft. Some of that struggle, such as a sense of alienation from family and friends or the pains of empathy, is universal to the artist, while other aspects remain particular to Darwish, as a Palestinian scribe. His is a double weariness; it is not only Darwish the Palestinian who hangs exhausted on the cross but also Darwish the poet, who has discovered the cost of being a man mourning the entire world, as he describes the titular poet in the sly, arresting “The Appearances of Taha Muhammad Ali.”

In that poem, Ali tells the narrator, “Death has liberated me / from the shackles of our small jailers / just as poetry has liberated us / from the greatest jailer—time.” Poetry, Ali implies, bestows immortality to its maker. Darwish, like any artist, finds this notion seductive and assesses its possibilities in several poems, including “The Sleeper in the Stone,” where the poet is enchanted by the image of a saint sculpture: “Like him, I want to sleep / and have an image made of me.”

For Darwish, this is the only hope for an afterlife, as his poems tell us that paradise is not some divine fantasy but, rather, the earth beneath our feet, the bread on our table, the breeze from Haifa, the dew on Mount Carmel. In Darwish’s liturgical imaginings, the poet prays to the goddess Justice and “follow[s] no one but myself.”

In several lashing poems in the fourth section of the collection, including the terse “Without,” Darwish probes his own estrangement: “I lived without a mother or father, / without siblings, / without peers, / I lived without kin or companions, / without allies. / I lived without.” And the bitter “Thieves” describes a material impoverishment imposed by a grasping cohort: “I know I’ve got nothing left— / all my food was eaten by thieves / who are laughing now / and burping and farting in the hall / (the thieves are old neighbors and classmates and cousins).” But it’s the poet who has the last laugh, for he has accepted this state of being and declares defiantly, “You know I want for nothing— / I let that food go of my own free will.”

And a poet outwitting death through genius is not so simple. The artist toils knowing that his work may not achieve lasting influence, an anxiety manifest in “To Lament a Mountain”: “I’ll risk my impermanence, / I’ll risk the fact that you’ll endure / while my words crumble and decay.”

Even if the poet’s words last, it comes at a psychic cost. In “Obituary,” Darwish writes, “He fought the invaders as best he could. / He wasn’t victorious, / but neither was he defeated. / In oblivion he made a life / for a thousand years to come. / He died fulfilling his poetic obligations.” The oblivion denoted here reappears as various forms of limbo endured by the poet. He makes his country in the state of “equivocation and doubt,” next to “The sea: / hope embroidered with despair, / despair distilled from hope,” between a shattering past and cruel present.

At times, the laconic poems in the fourth section can feel petulant, more interested in settling scores and calling out those who have disappointed the poet than in engaging with life’s mysteries. These short poems are the sucker punch hidden within the folds of an otherwise generous examination of what it means to suffer and resist suffering, to be an artist who contests the artificial boundaries of race, ethnicity, and nation, while remaining forever bound to a highly politicized homeland. The poet, as it turns out, is more Greek god than Christ, reflecting back our human foibles rather than transcending them.

In the end, and despite his reservations and disappointments, Darwish understands that poetry remains a powerful means of resistance. In “A Story from Shiraz,” Darwish shows us how Hafez confounds the invader Tamerlane, who obsesses over two lines of the poet’s verse, which declare that Hafez would give away whole cities for the mole on his beloved’s face. The conqueror, who “had never honored any god but cruelty,” cannot fathom a heart devoted to something other than power and acquisition, and asks the poet, “You’re still resisting, in such a wretched state?”

Hafez is, of course, a stand-in for Darwish, a latter-day poet of resistance. Exhausted on the Cross reveals a poet in many ways fed up with struggle, striving and sometimes failing to find in himself the generosity of his artistic forebears. Still, he writes, gifting us with this complicated but magnificent collection, the very existence of which reveals he has not yielded the fight, even while he calls out for the knife, for release from suffering. While the work flirts with despair, speaking to the bleakness of life on an earth that “tortures us relentlessly,” in the end these poems bend toward hope.

Yet Darwish acknowledges that hope is itself a form of madness “common among my people,” like “a wedding on judgment day.” The hope the poet cultivates is not one of pure childish expectation, like “my friend Tayseer,” a boy who believes he’ll see the Gaza sea again, but something polluted by experience. And Darwish’s “mad” people are poets and Palestinians, yes, but they are also all of humankind who, despite everything, endure in hope, however compromised.

Here, in verse that is by turns incandescent, conflicted, playful, righteous, petty, vengeful, and never less than astonishing, Darwish offers a raw interrogation of his “poetic obligations” and the spiritual and material cost of fulfilling them. Throughout this relentless collection, we see that while the wages of poetry-writing might not be death, the toll on the artist is significant.

Yet he persists. When he incites Mount Carmel to “keep on giving” “even when the dew runs out on your heights,” he is also instructing himself. “Remember,” he tells the mountain: “Generosity was born with you.” The final lines of the book proclaim where Darwish has landed in his own furious dance between hope and despair, between cynicism and generosity: “it’s all a journey, dear, / and here we are now, back from it. / I name it earth, and am not ashamed.” While he has not made peace with this flawed world, he accepts it, not as an act of resignation, but of abiding love.

Keija Parssinen is the author of the novels The Ruins of Us, which received the Michener-Copernicus Award, and The Unraveling of Mercy Louis, which earned an Alex Award from the American Library Association. A graduate of Princeton University and the Iowa Writers’ Workshop, where she was a Truman Capote Fellow, she is currently an assistant professor of English and creative writing at Kenyon College and lives in Ohio with her family.