Look at This Blue by Allison Adelle Hedge Coke 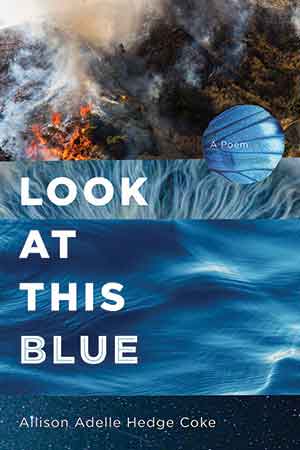 RECENTLY I FOUND myself way high up in the hills of Berkeley—at the outermost lip of Tilden Park, when the blue-gray dusk turned all the bay into a bowl: the city, the bridges all ballet and tripwire, East Bay’s hilly tumble of apartment buildings and cottages shining white as Roman light. I was tall enough, up there, to see the curve of the earth.

Allison Adelle Hedge Coke’s Look at This Blue is a bit like that. There is remove—not of emotion, which tests each line, but of vantage. Seeing that the world has bigness on its side, and beauty, and catalog. We haven’t yet invented anything bigger than a world and—Hedge Coke cuts straight to the spoiler—we won’t.

Structured as a single poem, with a bona fide syllabus, works cited, and index, Look could belong in the family of docupoetics if it chose. Its reportage and proximity to history reminded me of Aracelis Girmay’s The Black Maria, of Collier Nogues’s The Ground I Stand on Is Not My Ground, of Layli Long Soldier’s Whereas, and of Claudia Rankine’s incomparable Citizen: An American Lyric. I wouldn’t be the first to hear the voluminous and ecstatic witness of Whitman in Hedge Coke’s work, either.

Look at This Blue has a sweep as big as the state it loves and holds to account. From the calculated violence of Father Serra that resulted in tens of thousands of American Indians dying in the mission system, to massacres (Rancheria Tulea, Bloody Island, the “Ox” Incident, Oak Run, Howonquet) and a three-page list of nearly sixty weapons of control—from force to fascism, weather to water, taser and border crossing—Hedge Coke reminds us: “Not breaking this up for comfort.”

A book-length poem makes its own demands. A collection of individual poems can allow the reader a moment’s undoing at each pause. Hedge Coke doesn’t allow that relief.

We’re asked instead for resilience and attention. Stamina. Last summer I attended an overflowing Spanish-language rosary vigil in Ventura—my hometown, a town that appears in Look at This Blue, a town with which Hedge Coke has her own personal history—and there was a kind of intelligent exhaustion in that close chapel. Knowledge that despite airlessness, the closeness of death, sorrow and disbelief, heat, the rosary’s exactions, the room would somehow hold.

Look demands that the reader not break gaze. That we hold. And this is hard, actually. The facts hurt. They do. And we are asked to do the difficult thing: to feel.

Hedge Coke begins Look at This Blue with an invocation: “for California, our beloved.” Whole swaths operate as compendium, as glossary, a terrifying register of species nearing extinction. Names of animals insist themselves to song. I counted more than seventy, from puma to coyote, sow bear to crane, callippe silverspot to passerine.

Music is one of Hedge Coke’s great gifts. Smart, subtle, texturous. Hear the ur of burls, “cuts blisters,” and trunks. The breath-blocking plosives of “Ready-cocked,” with “choke.” The soft-as-a-tongue, rippling longrass melody of “newly returned” with “deerweed.” Consider this music, one of my favorite moments in the book, sonically both lullaby and surreal as the opening page of Joyce’s Portrait:

Beauty and power of the line in Look is formidable. From “Anyone can see someone once worked this out” in condemning the racism inherent in urban design to “Could be any mama” of a woman cruelly deported to Mexico. Commodity is a “harness,” with “even rainwater for sale.” And truth, bright as train track: “Schools were made to break us.”

The litany could spill into despair, and it sometimes does. But hopelessness would be too easy. By citing hope, and she does, Hedge Coke complicates things. Because there is still something left to be done, we must continue to care: “Take heart. Earth hears every tremble touch. Feels each foot. Listens now. / Bring her justice, protection, peace.”