In a warm bed, the minute just before dawn.
A blackbird has woken up and is tracing
a figure eight outside the window. Below
the sound again of unknown hoodlums breaking
a car mirror, compact fragments of the sky
and city lying there. Only the blackbird
sounds the alarm. In a minute, we must rise
and put on for the world some sort of disguise.

But not just yet. In a minute, dawn will show
to slash the window curtains with its sharp sword
and catch us, warm, in flagrante delicto.
In just a minute. As yet the world is shard
by shard still affixing faces – so and so
in a broken mirror. Variants grow hard
and harder, solidify, the world recast
wavers a bit before putting on the last.

Shadows of Clouds on the Move

Chessboard meadow, shadows of clouds on the move.
Hopping like a white knight, he tries to outrace
the black field’s flow, but the pattern running through
is faster, a machine a million paces
ahead of him, so he stands still. He stands there
and waits, let them disappear without a trace,
broken against the forest’s edge, black shattered
squares. November. Anyway, it’s no matter.

After all, the sun was just licking his face.
And isn’t it the case that we have so much
still to say? Beyond the mountains, the rusty base
of horizon grows dusty, a small town touched
by fire becomes a torch and hoarfrost laces
grass by the school. He counts out the days as such
one by one, like stones, then swiftly a flicker
of sun lays waste to it all with one finger.

And why does he wait, leaning against the wall,
with empty pockets and no bags in his hands,
for he has already been given it all.
In the papers he inherited are plans
for a town, a twisting road, a scripted squall
of clouds and fruit trees, a station with strands
of iron tracks through which a journey sings and
the twentieth century cries, pounds, dies away.

The maestro has sent him a card with a crushed
May bug on the back and an invitation
to that night’s concert – summer is to be pushed
through the thinnest cornet. A tuba rerum,
and the sky is already turning to blue,
so he balls up a page, watches how the flame
slowly straightens it, then carefully with speed
grabs hold the corners, opens the page and reads.

Such tall buildings, so many shops and flashy
bottles, cars. Such an intricate grid, network
of streets, elevators and stairs all the way
to the sky. And such flashy teenagers perched
on the elevators, in the shops – Jesus
is just a phone call away. All the famous
heroes fat and lipsticked from the silver screen
in stretch limousines, they’re leaving the theater

straight to your handheld device. Network of streets
so precise, and flying round it from sunup
this mad gnat. Today my shoes cracked on my feet,
but I discovered a secret: Europa
had many children by the bull – here they keep
hidden in offices and meet by discrete
satellite link, data blink. I’ll take refuge
in the gap between Scylla and Chrysler blue.

Translations from the Polish
By Mira Rosenthal

Editorial Note: For more, read “Every Poet Has to Be Lonely”: A Conversation with Tomasz Różycki and His Translators. 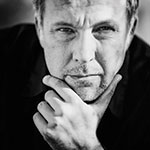 Tomasz Różycki rose to both critical and popular prominence as an important voice of his generation in Poland when his fifth book, Twelve Stations, won the Kościelski Prize in 2004. Różycki was first introduced to anglophone readers with Mira Rosenthal’s translation of a selected poems, followed by his sonnet collection Colonies, which won the 2014 Northern California Book Award and was shortlisted for the International Griffin Poetry Prize and the Oxford-Weidenfeld Translation Prize. 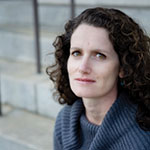 Mira Rosenthal is the author of The Local World and translator of two books by Polish poet Tomasz Różycki. Her work has received numerous awards, including an NEA Fellowship, a Stegner Fellowship from Stanford University, a PEN/Heim Translation Grant, and the Northern California Book Award. She is assistant professor of poetry writing at Cal Poly.