President Abraham Lincoln gave the order to execute thirty-eight Dakota Indians in Mankato, Minnesota, for their actions in the Dakota War against white settlers who had first stolen their lands, then their rations, and raped their women. At 10 a.m. on December 26, 1862 the synchronized hanging of thirty-eight Dakotas was, and continues to be, the largest mass execution in United States history. Four thousand settlers attended the execution. After the mass burial, the bodies of the American Indians were dug up by a local doctor and used as medical cadavers.

Fast-forward eleven years to November 1873. Dr. Willis Danforth of Illinois treats Mary Todd Lincoln for “nervous derangement and fever in the head.” He notes peculiar symptoms. Mrs. Lincoln tells him that someone is removing wires from her eyes, especially the left one, and the bones from her cheeks. She attributes the fiendish work inside her head to an Indian spirit. Nightly, she claims, he lifts her scalp and replaces it by dawn, sometimes cutting a bone out of her cheek. “The Indian,” she says, “slits my eyelids and sews them open, always removing the wires by dawn’s first light.”

Mrs. Lincoln’s nervous condition becomes legendary, much to the dismay of her only surviving son, Robert Lincoln. In May 1875, Mary Todd Lincoln goes on trial in Chicago for insanity. Judge Marion Wallace presides. Robert Lincoln testifies against her. The jury deliberates for ten minutes before bringing in a verdict. They recommend that she be placed in an asylum. Robert Lincoln escorts Mary Todd Lincoln to Bellevue Place Sanitarium on Jefferson Street in Batavia, Illinois. Once there she’s ensconced in the private residence of the home at Bellevue Place Sanitarium. Mary Todd Lincoln continues to blame an American Indian spirit for her madness.

4 a.m. Mary Todd Lincoln’s rooms. Many candles
light the room. The air is hot and stifling.

Savage Indian
With a long rope, he shackles her legs to the chair
for the 57th time tonight.

Gar Woman. That is your true name. Gar feed at night,
Sometimes eat their eggs.

We were all once fish
The scent of woman during copulation reminds us.

Mary Todd Lincoln
Vulgarity at last, just like my Mr. L.
He once asked me why a woman was like a barrel.

Mary Todd Lincoln
She giggles.
You have to raise the hoops before you put the head in.

Savage Indian
He breathes deeply through his nose.
Snorts the bad air. Leaves her side, walks around her bedroom.

Mary Todd Lincoln
Fiend, he was my lover, father, and comedian.

Savage Indian
He sniffles and pinches her things. The nit comb
on her bureau intrigues him the most.
Fishy in here.

Mary Todd Lincoln
She smoothes the wrinkles of her sour nightdress,
the one she’s worn since March 12, 1875.Ghoul, Specter, Poltergeist, Banshee,
You are the fishy one.
Savage, at last be gone from my head!

Savage Indian
Quiet, someone is coming.

Mary Todd Lincoln
No doubt the Wandering Jew,
Nightly he steals my pocketbook.*

Savage Indian
Hush! Be still.
He moves in close, gently caresses her face. Takes a sharp flint from his leather pouch, slits the soft skin above each eyelid, and then sews it firmly open with a thread of silver filigree.

Mary Todd Lincoln
Ecstatic.
Oh! At last I can see the world as it truly is. 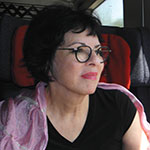 LeAnne Howe (Choctaw) is the author of Choctalking on Other Realities (2013), winner of the inaugural 2014 MLA Prize for Studies in Native American Literatures, Cultures, and Languages; the novels Miko Kings: An Indian Baseball Story (2007); Shell Shaker (2001), winner of the American Book Award (2002); and the poetry collection Evidence of Red (2005). The excerpts here are from her current manuscript, Savage Conversations. She is the Edison Distinguished Professor of American Literature at the University of Georgia.