The Bible for Unbelievers: The Beginning: Genesis by Guus Kuijer 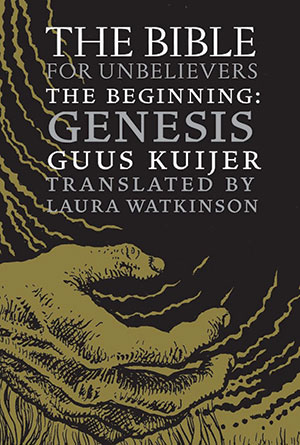 The Bible for Unbelievers: The Beginning: Genesis

The Bible has occupied a central position in Western culture since Constantine’s conversion to the Christian faith. Once universally recognized as the infallible word of God, the texts that make it up have been incrementally opened up to other modes of reading. Guus Kuijer, better known in his home country of the Netherlands as a prolific author of children’s books, presents a compelling vision of the Bible as a storytelling vehicle to explore the nature of doubt in his book The Bible for Unbelievers: The Beginning: Genesis.

The title is somewhat misleading as Kuijer’s reframing is more about uncertainty than disbelief. Nowhere is this more evident than in the opening chapter, leading off with a creation myth wherein the first thing created is God in the form of a word. Kuijer leaves open multiple explanations for God’s creation ex nihilo, including the possibility that it is all Adam’s means to explain what he cannot know. Still, Adam’s conversations with God (as well as God’s conversations with God) lay the conceptual framework for all that follows: the myriad “sins” that emerge from possessing a consciousness forever isolated from the universe from which it emanated, including shame, jealousy, hatred, miscommunication, greed, and cruelty.

Kuijer’s Bible adds dimensions of depth by recasting secondary characters into the role of narrator and blending emotional and psychological layers into the narrative that are, at best, only alluded to in the original text. His prose, as conveyed in English by translator Laura Watkinson, is plainspoken, conversational, and never dives off into complex world-building at the expense of each chapter’s core message.

When considered as scripture, the Bible is a daunting text in that it leaves no place for the doubting. Guus Kuijer’s great triumph in writing his version of its opening book lies in creating a space for the skeptic to marvel at the prescient nature of its teachings. In opening those stories up to those who cannot accept the theological claims often accompanying them, Kuijer transforms the book of Genesis from a story about a distant, jealous, and wrathful God into a very human one about how uncertainty (or lack thereof) shapes the way we view the world.