Let it go back to the anthill.

If it brushes inattentively against your fingers
climbs them
and daydreams
in the furrows of your hand,
don’t chase it away or squash it.

Let it go back, as best it can, to the anthill.
Guide it to where it belongs.

Surely the others, those smart-asses, will make fun
of its new habits,
of its stubborn disorientation.

Let it go back, if it can, to the anthill,
even though it carries no shred of a leaf
on its ant’s back.

Don’t kill it. There, others,
but not many, will welcome it
and find it a place in the crowd.

Maybe it
(just like you in the poem)
confuses, without arrogance,
the mystery of the world
with the palm of your hand.

Why force out dreams and nightmares
if everything here convulses until it tames amazement?
This, only in part, is what Breton realized with his naïve eyes
as they drifted across the surface of these lands.

In those days the subsoil was a depth conquered
by water, mud, and ruins more ancient
than the gods of Lautréamont.
Since half a century ago, without resorting to imagination,
the inhabitants of this valley have traveled
underneath the streets,
excavating, day by day, its foundations.

A bustling, flowery market
(with special offers and suffering)
travels along tunnels and train cars
pressing the existence of those who rush by,
of those who seek shortcuts underneath everything.

A blind man, maybe not watching, plays a melody
on an electric piano with his right hand
as he keeps the beat sinister with the other,
between trip-ups, with a cup that is maraca and collection box;
quality chocolates and peanuts are advertised
for ten pesos (“they cost what they’re worth”);
women in face masks look sideways at couples that embrace
and kiss like moles in heat.

Every kind of advertiser enters and exits the train cars,
station to station: people selling self-help books
and biographies of Che; evangelical preachers;
vendors of chewing gum and lozenges
for the good of throats and mouths;
dazed deaf-mutes; paraplegics in casts;
DJs with backpacks and singers with electric-acoustic guitars
who offer ballads and rock in English and Spanish.

All struggle, body against body,
like the wounded of extinct battles.

The father of surrealism noted none of this in his log,
not while visiting these stops
nor while marinating his subconscious in the waters of the Seine.

Translations from the Spanish
By Arthur Dixon 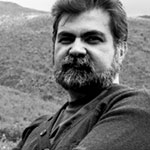 Arturo Gutiérrez Plaza (b. 1962, Caracas) is a poet and essayist. He has published various books of poetry and literary scholarship, and he received the Premio Hispanoamericano de Poesía Sor Juana Inés de la Cruz in 1999. Cuidados intensivos (2014) is his latest verse collection. 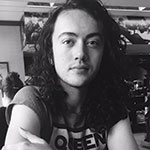 Arthur Dixon is a writer and translator from Oklahoma. He is managing editor of Latin American Literature Today, and he blogs at El Greñudo.