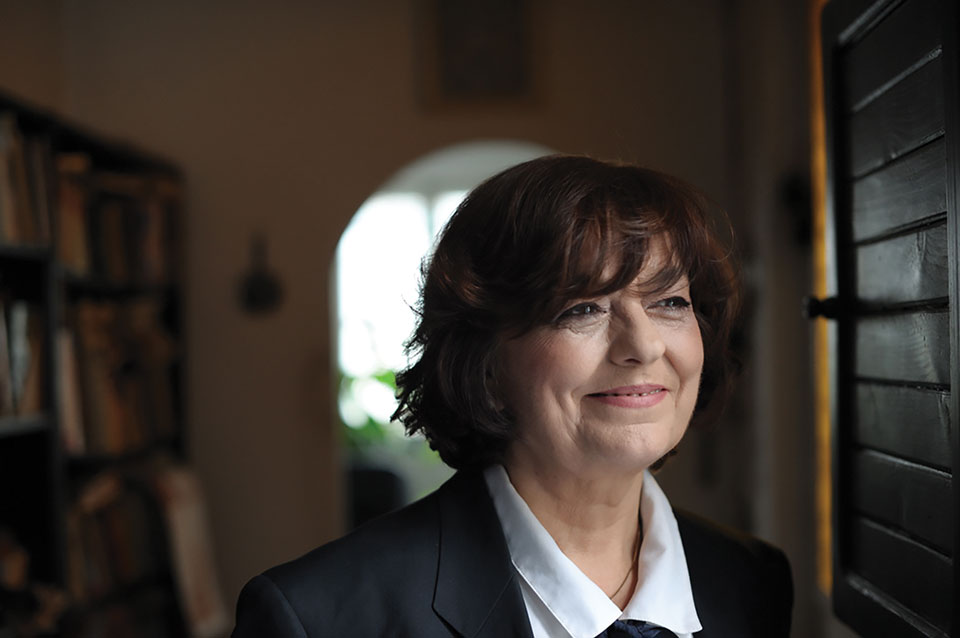 Ana Blandiana is a poet of rich formal resources. Since her first book, First-Person Plural (1964), she has written in a variety of forms ranging from sonnets to traditionally rhymed quatrains to a looser verse form with irregular or random rhymes to free verse. We understand that form distinguishes poetry from all other genres and is a primary color in the expert poet’s palette of expression. With my co-translator, Viorica Patea, we therefore aim to reflect, to the best of our abilities, the particular form Blandiana chooses for each of her poems. If, for example, a poem entitled “Degraded Sonnet” (page 43) weren’t re-versioned in sonnet form, the resulting translation would only be laughable.

Blandiana usually frames her poems in a deceptively simple language. (That simplicity, however, reduces as the degree of formal control increases.) Her work shows influences from a large number of Romanian writers, such as the Romantic poet Mihai Eminescu (1850–89) and the interwar poet and philosopher Lucian Blaga (1895–1961). It would be futile to try to capture the responses, echoes, and allusions to those authors in a translation for readers unfamiliar with the Romanian context, so we have incorporated echoes and allusions to preceding figures in the context of the target language. Helpful models for her free-verse patterns are William Carlos Williams and Ezra Pound. Other models for the varying degrees of more formal verse are Robert Frost, Elizabeth Bishop, and Robert Lowell.

Blandiana also cultivates a wide range of themes. She is probably best known as a poet of resistance to the two Communist dictatorships she lived through in Romania. Working under the relentless eye of government censorship makes it necessary to learn to write by indirection. Though her language is often simple, what it conveys most often is not. The deeper you delve beneath those deceptive surfaces, the more complexities and layers of meaning you will find.

Another of her main—and obviously related—themes is the diminishment of spiritual values in a society dominated by materialism and the marketplace. When life itself is becoming a commodity, the values embodied in poetry are threatened with extinction. The task of the poet is to resist, to protect and nurture those values, and to permit them to endure. This is the context for the two poems presented later in this issue.

The fact that both are rhymed is significant. The “rhyme” between form and content in “Degraded Sonnet” is fundamental to its meaning. The sonnet is a traditional poetic structure that evokes the regular architecture of a temple. As the last line declares, faith is nearly erased. Though threatened with dissolution, the sonnet’s structure stands.

In “Thistles and Gods,” which has a looser, irregular rhyme scheme, the balance between form and content was more difficult for us to approximate in English. The Romanian word nemorţii literally means no-death or no-dying. We didn’t want to insert a neologism where there was none in Romanian, so we finally settled on the phrase being immortal, which allowed us to make near-rhymes in stanzas 1 and 3 with temples and spectral. This poem may be more pessimistic than “Degraded Sonnet,” but rhyme resists in both, and the remnants of human spirituality endure.

Author of critical essays, translations, and poems, Paul Scott Derrick teaches American literature at the University of Valencia in Spain.