In that swirl of ideas, stuck in the middle of that overpopulation of bodies, I lose my cardboard piece. That is a sign too, another type of sign, a message from the gods of protesters.

I have it: an eight-by-eight-inch piece of cardboard to create a sign. It is small, but its message should be powerful, unforgettable, convincing. There are so many things that I can write on it, but I have no idea at this time. There is a protest to remove our governor from power, to throw him away like an useless toy. An immature, ignorant politician-boy. There is a tonality of revolution on the streets—I can almost hear in my mind the song from Les Misérables:

Do you hear the people sing?
Singing the song of angry men?

Dos Hermanos Bridge is pandemonium. I see these guys with a wooden sign moving toward me: let the whores rule that their children do not know.

A river of people carrying many other signs:

Puerto Rican flags, red, sky-blue, and white waving everywhere. Others are carrying the white and black flag of our country in mourning.

Puerto Rican flags, red, sky-blue, and white waving everywhere. Others are carrying the white and black flag of our country in mourning. Only a few carry the revolutionary flag of the Lares uprising. I can see the Caribe Hilton Hotel mosaic tower with a colossal Puerto Rican flag hanging from one of its sides, with the word “Force” written at the end of its stripes.

we are not “a small group,” we are puerto rico.

we, the daughters of crisis, got tired.

curse the ruler who turns weapons against his people.

Faces never seen before, some known faces and faces that I will never find again during this life. But all faces have the same feeling on their eyes, anger with sparkles of hope, and I still don’t know what to write on my sign. It is small, but its message should be powerful, unforgettable, convincing.

welcome to the circus

may the mother who bore you forgive you.

i fight for my son with a special condition.

I take pictures of the young women and some guys, part of a performance, in front of the capitol building, duct tape covering their mouths: “RESIGN” is written with black magic marker. They knew what to write, while I’m not getting inspiration yet.

i do not express myself, i knock you down.

I continue moving in that anonymous mass of people, my people, I wonder if some of my genetic material runs through some of their bloodstreams, brothers of this fight, at least. Sisters of previous battles, of ancestral uprisings. Africa still talks in me. Taíno people still dream in me.

puerto rico, how cute you look dressed as a fighter.

I hear cheers when a young man get access to a zone of San Cristóbal Fort wall carrying the black-and-white Puerto Rican flag. I taste some victory while watching that guy running in freedom, apparent freedom.

my daughter will read the best history book, the one with the puerto rican revolution.

We, the masses, ascend toward Norzagaray street. Sweat, heat, sun, but nothing of that bothers more than how the abusive government officials chat. I’m not a bitch as they call many women. I don’t want to imagine being eaten by crows after my death. These fake politicians knew what to write on the chat and I’m still trying to think of what to write on my sign. At least I can use my cardboard as a fan to avoid the heat.

gay is the new black.

grief recovery center of pr, we ask you to resign.

what doesn’t work, i don’t recycle.

let them take off, we never.

your corruption is killing us.

People are standing over the walls near La Perla. They remind me the videos during the fall of the Berlin Wall. Momentarily, I feel a smell of liberty upon that vision. The fall of the kid governor, the fall of the wall of our offenses would occur soon, surely.

fury is the only party that unites us.

We climb another section of the wall to arrive to higher ground to watch and hear the singers talking about the events that led the people-dragon to spit flames over Old San Juan. The flames are songs, Ricky Martin, music, cheering, Bad Bunny, flags, dreams, Calle Trece, lights, perreo, conversation, relief, drinking, eating. So much input for my mind and I’m not able to create my sign.

daddy, what do i do?

the people who elected you today withdraw their vote and order you: resign now!

This crowd is not only a clot in this colonial city artery but a resonant murmur originated from our Caribbean continent.

We move down Cristo Street to find more people, less space to walk, and more ideas rising on the signs that I continue reading, but I am still convinced that I don’t want to repeat the protests, their complaints, I just want an original thought for my eight-by-eight cardboard. This crowd is not only a clot in this colonial city artery but a resonant murmur originated from our Caribbean continent.

death to the colony, death to rats.

the force is strong with this movement.

In that swirl of ideas, stuck in the middle of that overpopulation of bodies, I lose my cardboard piece. That is a sign too, another type of sign, a message from the gods of protesters, an enigma revealed during this pilgrimage to the oracle of Old San Juan. Probably, I’ll have time to write something else in a near future, in a diary, or on social media, or on a napkin, but certainly it won’t be on another eight-by-eight cardboard piece. Maybe it will be small, but its message should be powerful, unforgettable, convincing. 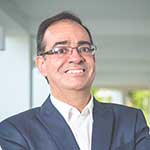