We set free birds of anger into the wind
filled with wet nights and dark dawns.

Streets pour smoke and turn into a sacred tomb
while newspapers twirl among us, and we eat ravings.
Car horns deafen my death.

In the rambling verses written on a wall,
blood throbs like a traffic light.
I am the barefoot whore.

Cowardly steps
hurt until they burn.
They come and go, spitting semen that pay for the hit of the day
and then they disappear,
pedaling unicycles of status quo.

We go outside, burdened by mournings
hypnotized by red-and-blue nightmares
that echo through the step-filled alley
stained with leftovers of Chinese food.

Meanwhile Old San Juan ex-politicians
get up as early as graffiti artists,
They light up and inhale psychedelic applause.
We keep dying between newspapers and our own steps,
inevitably loving the scent of the city,
falling into the void just like birds of anger.

Requiem for My Shadow Girl

After the storm,
then came silence
and its explosion.
A dessert of shadows closed its doors.

Then it rained.
We lit up our debris
but then had to turn our backs to the light.

Goodbye sadness
goodbye my Shadow Girl
farewell to you and to the latches that guarded
bedsheets never used by you.

Still, we reached the city
wings flapped as we arrived
people died
(my daughter died);
silences capsized,
they were so many,
we mistook them for crucified daisies.

The sea fed from exiles and fear,
it took them all away, all of them and their misery.
It also returned our gazes. 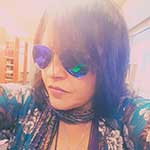 Ana María Fuster Lavín is a Puerto Rican writer and cultural columnist. She received awards from PEN Puerto Rico’s chapter for her novel Requiem and from the Instituto de Literatura Puertorriqueña for her short-story collection Verdades Caprichosas and for her poetry collection El libro de las sombras. She is also the author of several narrative and poetry books, including two gothic novels: (In)somnio and Mariposas Negras. 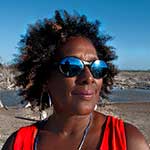 Mayra Santos-Febres is the author of some twenty books of poetry, fiction, and literary criticism, including the novels Sirena Selena, which was a finalist for the Rómulo Gallegos International Novel Prize, and, most recently, La amante de Gardel, winner of the Prix Littéraire International de L’Académie de la Pharmacie, France. A Guggenheim Fellow and recent writer-in-residence at the Rockefeller Foundation’s Bellagio Center Residency Program, she is the recipient of the Juan Rulfo Prize for short story, Puerto Rico’s National Literature Prize, and the Primavera Prize (Spain). Currently, Santos-Febres is a professor at the University of Puerto Rico, Río Piedras, where she directs the creative writing workshop and Sirena Writing Lab.