Tomás and Frank Go for a Ride on Their Bikes

After a hurricane, two young boys find some things, but not everything, changed.

At house T24 of Bellísima Street, in Lomas Verdes’s second section, in Bayamón, the storm only knocked down the mango tree that had been in the backyard since forever ago. When the tree fell, it took with it the fence that had cordoned off T24’s residents from those of Amapola Street’s house H14. Part of it crashed into H14’s roof. Thank goodness the roof didn’t collapse, because it would have crushed Frank’s bed, and he used to spend all day in that room. That said, given the situation—the rain, the winds, the anxiety, and the groaning of the walls—it is difficult to guess where he would’ve been at that moment. Maybe laying down between his parents, crying in the bathroom, looking at the trees’ sway from the kitchen, or hiding in one of the house’s many closets.

When the blow was heard, T24’s residents looked out of their window; Frank and his family must have done the same. Everything was hazy. In T24, Tomás got scared, the uncertainty in his chest grew, and he began to yell his neighbors’ names, calling for them to come over, to please come over. The howling wind, however, was stronger.

Tomás grabbed his mom’s phone, because his was very dead. Knowing his friend’s number by memory, he texted Frank:

Many hours later, when the gusts and the nerves had died down, Bellísima T24’s residents and Amapola H14’s came out to see what had happened with the tree, the fence, and the roof. They were surely astounded, but they were even more surprised to find that there were no trees, streetlamps, or balconies left standing anywhere and that even a few neighbors’ roofs were gone. That deep chill that paralyzes the whole body, starting from the stomach, overtook all of them.

Tomás approached the nonexistent fence. Frank did the same. They looked at each other, shyly, still tearful and wanting to hug, but instead they turned to their classic handshake: a slap of the hands, a knock of the shoulders, a pat on the back.

Meanwhile, the rest of Bellísima T24’s and Amapola H14’s residents were making decisions. The tree could not be moved until the authorities arrived. The government had to handle it. If they did not see it on the house, they would never believe them, and the subsidies would not arrive.

Frank and Tomás thought they should go around the neighborhood on their bikes. See how the other streets were doing. Go by Natalia’s house, Eduardo’s, and make sure they were doing alright.

Their parents didn’t allow it.

“This is not the time for two grown-ass kids like you to be messing around on their bikes. Have you seen the state of the streets?”

It wasn’t until the third day, when there was still some naïve hope that things would normalize more or less quickly, that H14’s Frank and T24’s Tomás were allowed to go on their rides. It was the first time that Tomás went to Frank’s house without having to walk up to Bellísima’s corner, turn left on Hibiscus Street, and then take another left to get to Amapola. He simply crossed over the broken-down fence that connected the two houses’ backyards.

He had his bike with him, and he carefully raised it from the ground so as not to scratch it with the mango’s trunk. His mother yelled from afar, telling him to be very careful and, more importantly, to have good judgment. Frank was waiting for him with his bike in his garage, and wearing a cowboy hat that Tomás had never seen on him, even though they saw each other every day and knew each other from way back when.

A slap of the hands, a knock of the shoulders, a pat on the back and “Dude, where are we headed?” Tomás told him that they were going to go by Natalia’s, then Eduardo’s, like they had originally planned.

But before that happened, Tomás wanted to try something. They returned to T24 and confirmed what he’d thought: the mango tree was inclined enough so that it could be used as a bridge to get to H14’s roof. Tomás started to go up.

“Everything seems sadder from up here,” Tomás said.

Frank kept quiet. He felt Tomás’s hand skimming his, touching its edges, intertwining with his fingers.

Frank kept quiet. He felt Tomás’s hand skimming his, touching its edges, intertwining with his fingers.

He thought it was weird but didn’t do anything.

“Let’s get going, we have to get back early.”

They climbed down, got on their bikes, and pedaled away. From Amapola they went through Hibisco so as to get to Bellísima. They then kept going straight and, carefully, crossed Lomas Verdes Avenue. On their way, they avoided the debris, the fallen branches, rubble, the zinc tiles, the desolated glances shot their way from peoples’ balconies.

They didn’t say anything for a while. Maybe because of what had happened on the roof, maybe because of the anguish they felt after having seen everything in pieces.

Later, four left turns after San Agustín church, they went into Duende Street and stopped in front of house 2P11. It was Natalia’s house. But neither of them dared to call.

They talked softly there.

“You’re more her friend than me.”

Natalia’s dog interrupted the exchange, barking. He barked so loudly that her mom came out to see what was up. It wasn’t only her that came out. All of the neighbors did so too, to figure out why that dog was going crazy.

Both Tomás and Frank, at the same time, said the same thing:

In the three days since the storm, the court had become a dump.

In the three days since the storm, the court had become a dump. There were mattresses in the grass, pieces of wet furniture, zinc tiles that had once been the house next door’s roof. There, a little bit beyond all the trash, sitting on the bleachers and talking with a group of other girls, was Natalia.

She was happy to see them, like always. She hugged them and kissed their cheeks. She introduced them to her friends: Medline, Anaís. They talked about how horrible the storm was, how much it sucked to have no water or power, of all the sad things they’d seen recently.

Tomás told them of the mango tree and how it had fallen on Frank’s house, of how scared they’d been, of the fact that every time he remembered he felt like crying. His eyes teared up.

Frank asked Natalia if she knew something about Eduardo. She said she didn’t, that she’d gone by his house earlier and it seemed abandoned. Everything looked terrible there.

Natalia said she couldn’t; she hadn’t been allowed to go that way.

They did just that. They pedaled down to Jacinto Street’s house 2X6. What Natalia said was true. The house seemed empty. There was more trash in front of its gates. Nobody could go in or out until that was cleared up. They called Eduardo, yelled, but nothing.

When they returned to the court, Natalia and the girls were not alone. Miguelito had arrived. Neither Frank nor Tomás liked Miguelito, because he was always bullying them. Yet they went to say hi, thinking of how they’d heard back home that there was a before the hurricane and an after the hurricane, that nothing would be the same.

They’d heard back home that there was a before the hurricane and an after the hurricane, that nothing would be the same.

“Look who’s here, Tomás and his boyfriend,” said Miguelito, as soon as they stepped on the court.

The boys from Bellísima and Amapola laughed and kept going forward, to shake his hand.

But it didn’t help. Miguelito angrily asked why the hell they wanted to know.

“Dude, calm down, I was just asking.” Frank asked, and clarified: “You know, because of the hurricane and stuff. If you want, we’ll leave.”

Natalia shoved Miguelito and asked him what his problem was, that Tomás and Frank were not messing with anybody, that he should leave them alone.

“No, no, now you’ll stay here,” he said and walked up to them, menacingly.

Natalia and the girls insisted that he should leave them alone. But that didn’t matter to Miguelito. He pulled Frank’s hat off, threw it to the side, and shoved him to the ground. Tomás tried to calm the situation down, say something, but Miguelito shut his mouth with a fist to his stomach. The girls yelled and jumped on him so he wouldn’t hit Tomás again. Frank got up on his feet and helped Tomás do the same. They ran to their bikes and took flight. They looked back over their shoulder and saw Miguelito laughing in the middle of the court, fighting with the girls.

They pedaled as fast as they could, as if somebody was after them.

They got to their houses through Bellísima’s T24.

“Let’s go to the roof,” said Tomás, after a while.

And they climbed up. There, they were able to breathe, to feel at ease, as if nothing had happened; as if they were invincible. 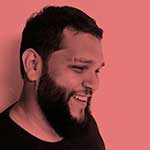 Juanluís Ramos (b. 1985, Bayamón) is the author of two story collections, Shadowplay (2016) and Reyerta TV (2009). For the latter, he obtained the 2009 National Short Story Prize awarded by the PEN Club Puerto Rico. In 2017 he received the Festival de la Palabra’s Nuevas Voces prize, an award given to up-and-coming Puerto Rican authors. 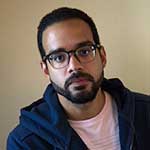 Sergio Gutiérrez Negrón (b. 1986, Caguas) is a novelist and short-story writer. He has received the Instituto de Cultura Puertorriqueña’s National Novel Prize in Puerto Rico (2012) as well as the Festival de la Palabra’s Premio Nuevas Voces (2015). In 2017 he was selected by the Hay Festival as part of Bogotá39.