The Clock of the Long Now will operate knowing it will lose the correct time, exposed as it will be to imprecise temperatures, stellar and solar alignments, tectonic movements, orbital dynamics, and the fallacies of the human hands that must keep winding it by turning a crank or pulling a chain.

In the German village of Halberstadt, at the end of the twentieth century, a trust of theologians, composers, and musicians gathered to discuss the 649-year history of the organ, what Mozart called the king of instruments.

Three centuries earlier, in that same German village, a Court Jew had defied the authorities by printing two thousand copies of the twelve-volume Babylonian Talmud as a gift to the poor. The Talmud, which runs almost three thousand pages, can weigh about thirty pounds. That same Court Jew had also built a synagogue, baroque in style and said to be quite beautiful, that stood for more than three hundred years until it was demolished in 1938, after Kristallnacht, and from which rose an aircraft factory a few years later, manned by slaves transported from nearby Buchenwald.

In that same village, there’s a church without a basilica, centuries old, bare and rugged and abandoned, a former monastery and pigsty, constructed out of a harsh, cold stone.

The theologians, composers, and musicians built an organ there that kicked off its only concert with a seventeen-month rest. Its first note came later, like an air-raid siren, and played for months and months, heaving and exhaling, crackling and burning.

Now, every few years, the villagers – descendants of the Court Jew, of those who devastated the synagogue and worked in the factory and at Buchenwald – come and rearrange the thirty pound sandbags that weigh down the organ’s pedals. There’s a whir and a note is added and the chord changes. Pipes are installed as needed. Each movement will last a lifetime.

The Clock of the Long Now will tick once a year, the century hand – which corresponds to the hour hand on a typical timepiece – will move every hundred years.

Using the Daf Yomi cycle of a page day, it takes more than seven years to read the Talmud, though enlightenment is a different matter.

On the planet Venus, a day lasts longer than a year.

Here on earth, blue whales come to the ocean surface mostly at night, their hearts pumping a torpid four to eight beats a minute. Their songs are composed of handful of notes, but we usually hear only about half of them, the tones dropping into frequencies too low, too deep for us. 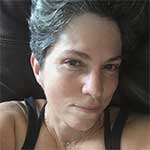 Achy Obejas is the author of The Tower of the Antilles, which was a PEN/Faulkner finalist, and several other books of fiction. Her first full book of poetry, Boomerang, will be published by Beacon Press in a bilingual edition in 2021. She lives in the San Francisco Bay area and successfully nominated Edwidge Danticat for the 2018 Neustadt Prize.