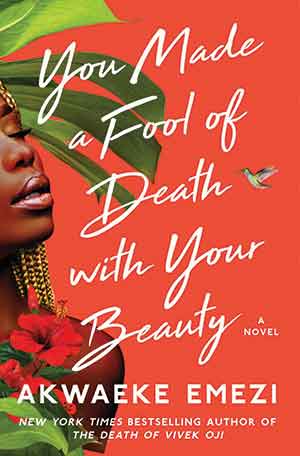 WITH THEIR SEVENTH book, Akwaeke Emezi adds another genre to their catalog: romance novel. The novel begins with Feyi Adekola recovering from the trauma of losing her husband, Jonah, in a car accident. Though Feyi has since become an artist, using visceral media such as blood in her work, she has not been able to connect romantically with anyone for five years—until the opening of this novel, when she and the first of her partners of the novel, Milan, have sex. Her best friend, Joy, cheers for Feyi finally connecting with a man and scolds her for not using a condom. Feyi and Joy’s friendship is a delight in the novel, and their connection sometimes feels more interesting than the connections that Feyi has with the men throughout the book.

After Milan comes Nasir, a man who at first offended Feyi but who later manages to endear himself to her through his attentiveness to her art and history. He is interested in her, but Feyi feels in her gut that something is not sparking: “They were just friends, with faintly innocent benefits, true, but just friends.” However, he suggests her name to fill in for someone who has dropped out of an art show of “Black Diaspora artists” on his home island. (Emezi explains in an interview: “It’s a fictional Caribbean island, and honestly, I just never got around to creating a name for it.”) She jumps at the chance, even if it means traveling with Nasir, who has agreed to let Feyi set the course for the pace of their relationship.

Upon arriving, Feyi learns that Nasir’s father, Alim, is a famous chef that she and Joy have fangirled over in the past. Joy cannot believe Feyi is about to be staying in the house of Alim Blake. Upon meeting, the spark that Feyi does not feel for Nasir ignites when she meets Alim. They connect over lost loves—he lost his wife at a young age—and over the art that she is on the island to exhibit. Her art career grows as Pooja, a wealthy benefactress, takes interest in Feyi’s ability to portray grief, she having lost a child. On the island, Feyi comes into her own as an artist and a romantic partner, though leaving broken and angry hearts in her wake, which she astutely describes as “some next-level shit.”

Much of this novel feels “next-level” while parts of it feel quiet and mundane, a balancing act Emezi takes on in their first romance novel. The end will shock some and not come as a surprise to others as Emezi takes readers along on Feyi’s search to come into her fullest self.