The Book of Goose by Yiyun Li 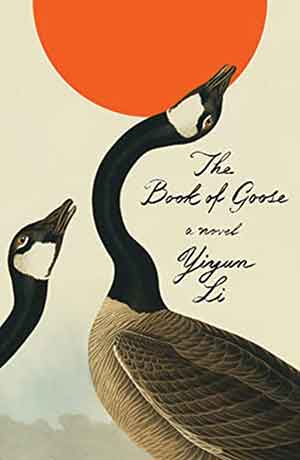 WITH EACH NEW work, Yiyun Li reinvents herself. Readers have come to expect her complexity of thought, detailed historical backgrounds, philosophic questioning, and rich characterization. In this new work, Li adds dual protagonists, the friends Agnès and Fabienne, each one the creation of the other. Agnès creates Fabienne through memory; Fabienne creates Agnès through fiction. Fabienne’s death in childbirth in 1966, like her sister Jolene’s in 1947, propels the narrative.

Agnès hears about her friend’s death in a letter from her mother, who still lives in their tiny village of Saint Rémy. From her married life with Earl in Lancaster, Pennsylvania, where she raises geese, she gazes back to early childhood and her deep friendship with Fabienne. Agnès compares them to apples and oranges—different but somehow the same. In the two novels they write together, they speak with the same voice, Fabienne dictating, Agnès copying and editing her words. Fabienne wants Agnès to be the sole author. The postmaster of the village, M. Devaux, finds a publisher for Les Enfants Heureux in Paris, promoting Agnès as a child prodigy similar to the real-life Minou Drout—poet, jazz musician, and actor from the 1950s. Their novel’s lurid details, like watching pigs eating a baby, reinforce the prejudices of an urban audience who want to think of village life as brutal and primitive.

Fabienne’s story enters Agnès’s consciousness so completely that she can write in her friend’s voice when tested. “We were the perfect pair,” Agnès muses, “one seeking all the other could experience,” as if born with joined selves, “yet neither she nor I could make a real life for ourselves.” Agnès was the whetstone for Fabienne’s blade, the orange she cut into effortlessly, the follower she crafted into the leader. The Book of Goose presents the past in an extended flashback, which Agnès uses to make sense of her loss. In her powerful novel about female friendship, Li probes the sources of inspiration when two become one.