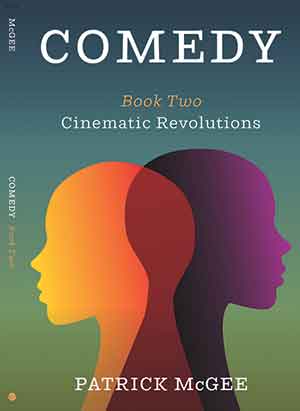 CINEMATIC REVOLUTIONS is the second book of a projected three-part series, inspired by Dante and William Blake. In the preface, Patrick McGee writes that this collection “perhaps comes closest to Dante’s Inferno, while Book 1 was closer to Purgatorio, but both are shot through with fragments of Paradiso.” In this collection, the author focuses on the cinema since it is “the defining art form of the twentieth century.” This collection, relying on an abundance of allusions to film and actual history, voices philosophers, dictators, writers, artists, directors, and other prominent personalities of the century (the work presents figures as diverse as Hitler and Martin Luther King). Such a roster establishes the horror of tyranny so profoundly unavoidable when reflecting on the twentieth century. In my review of McGee’s Archival Resurrections, book 1 of the trilogy (WLT, Spring 2021), I emphasized McGee’s presentation of the role of art and the ideals of democracy. That emphasis is retained in Cinematic Revolutions—this collection pronouncing the horrors of too much war, too much oppression—but countervoices are also heard.

The poet’s interplay between historical figures and films that have painted the towering, all-encompassing portrait of the past century’s attempts at civilization is remarkable, if not profound. In short, how has the cinematic portrayal of modern civilization encountered the brutal facts of history? Moreover, what may be the continuing significance of this history and its corresponding visual/artistic response? Will we be able to move past tyranny? What is the legacy of art? What is the efficacy of art, especially as depicted visually? These questions have no easy answer, but the poet demonstrates an uncanny ability to connect readers on multiple levels—reminding us of what has shaped so much of life as we have come to realize it today. The juxtaposition of actual history with cinematic culture swirls in this book, a whirlpool of contested ideologies—the outcome, though hopeful, certainly not guaranteed.

To be clear, the great variety of films alluded to offer more than a rendering of history. Rather, the poet suggests their place within our collective consciousness, reminding us of our cinematic selves, which, in the context of the violence of the twentieth century, merge into powerful, reflective social commentary. A quote from the beginning lines of “Canto 20” illustrates the struggle for transcendent purpose within the “waste land” that haunts us:

I looked around at the colorless landscape
That somehow seemed reflected in his face,
Dark yet emitting a beam that felt like grace

And flooded with exuberant light the space
Of this waste land to make a paradise,
Though perhaps only for astigmatic eyes,

Which stood in awe and yet would criticize.
So I said, “Some churches teach, those who do not
Know you as the son of a transcendent God

Will be judged and cast down by his furious rod,
But I stopped believing in that kind of legend
When I realized the sickness of mind that imagined

Such divine cruelty as something meant to gladden
The virtuous heart, which in truth is blackened
By dreams of vengeance and sadistic joy,

A world animated by love, not hate.”

Here the poet is reflecting the presence of Christ, rather than twentieth-century figures. The poet’s indictment of a misrepresented Christ suggests that even the highest ideal may be compromised, as is the case with so many of the other references in the book. Yet we still see the attempt to retain the hope of love overcoming hate.

As in the precursor volume, McGee masterfully demonstrates a fluid use of language within his thirty-three cantos, composed in three-lined, rhyming stanzas. A most helpful notes section at the conclusion lists, by chapter, the referenced historical figures and accompanying films.