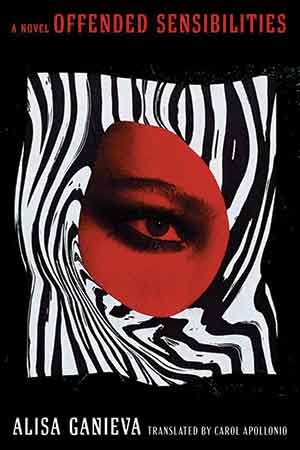 THE PRESENT, DESCRIBED accurately enough, can later read like prophecy. That Offended Sensibilities, first published in Russia in 2018, feels ripped from the headlines of 2022 is equally a credit to Alisa Ganieva’s attentiveness and an acknowledgment of our slip of attention to a decade of changes in Russian society.

Of course, the invasion of Ukraine (here called the “Crimean conquest”) goes back to 2014. Mentions of the conflict are few but pointed. When a teacher berates a classroom of youths dissatisfied with Russian society, she uses rhetoric that has become common to viewers of the news coverage on the Russia-1 TV network: “Revolution? Blood? Is that what you want? You want it to be like in Ukraine?”

The book’s title comes from the 2013 blasphemy law that broadly outlawed “defying society” and “insulting religious beliefs.” Upon this basis, Ganieva builds a story that shows the many ways in which the ability to widely interpret offense allows the authorities to wield a powerful instrument of calculated mayhem. Nearly anything can fall under the purview of offense: plays considered too racy get canceled, crowds are labeled terrorists, tutors are censured. Police intervention is everywhere, and denunciation is de rigueur.

In an unnamed provincial town, the death of a corrupt local politician kicks off an interweaving storyline, part mystery, part thriller. We follow several characters, each struggling in a world where wiles far outstrip wit or integrity as the way to secure one’s future. Characters’ thoughts bounce madly around, their minds stretched to breaking in the effort to keep ahead. Religion, sex, and money are the vices of this political backwater, where bureaucrats vie for the opportunity to meet The Guest, a visiting bigwig from Moscow.

In prose that flows quickly and comically, Ganieva shows us how the moral sense of a few loud individuals can be manipulated to enact wider societal changes. The local minister of culture declares, “All misfortunes begin with the disrespect for history!” Soon, the Holodomor (a manufactured famine designed to break a Ukrainian independence movement, which killed upwards of five million) is considered a trifle next to North America’s Great Depression. Whataboutism is a powerful weapon in the hands of those wanting to distract from their own nasty business. But suffering has no competition; it stands on its own.

With three books in translation now, Ganieva has established herself as an author of international importance. Here, as with Ganieva’s previous two novels, Carol Apollonio translates. Some clumsiness in the translation is allowed in an effort to catch readers up on Russian norms, practices, and traditions. While these instances slow down the reading of an otherwise fluid text, they also serve to show how foreign this country is to most readers. Russia’s reemergence as a bogeyman cannot be disconnected from a general misunderstanding of its history and culture.

In its vastness, the country may also remain a mystery to itself, divided from within by a gulf between rural and urban, and between classes both societal and financial, secular and pious. Born in the rural and religious Republic of Dagestan, Ganieva understands these divisions well. She knows, too, that her life in Moscow and her Russian Booker nomination mean her work primarily reaches a certain kind of reader. Offended Sensibilities shows that educating the Russian literati on the politics of their country’s hinterland is just as necessary as educating the foreigner.