Miss Chloe: A Memoir of a Literary Friendship with Toni Morrison by A. J. Verdelle 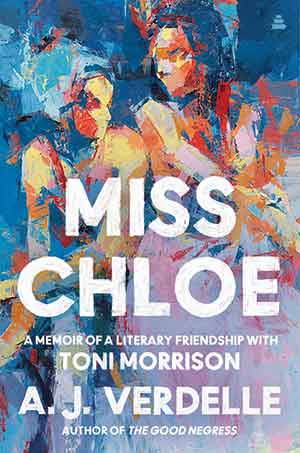 SHORTLY AFTER THE publication of Miss Chloe, a graduate student sent me an unsolicited text message exclaiming, “So far I am 21 pages into Verdelle’s book and I want her to stop telling my business!” Her excitement stemmed from the fact that Verdelle’s girlhood resonated with her own. She admitted that she too was a very heavy observer and spectator of the “wise old women.” The student’s text captures the essence of this remarkable book. Verdelle, like her mentor Toni Morrison, has a vested interest in the interior lives of Black girls.

Morrison read Verdelle’s first novel, The Good Negress (1995), and sent her a note commending the novel. Their first meeting occurred in 1997 when Morrison invited her to visit her in New York. Thus began the twenty-two-year friendship between the two. The book is organized into two sections: “Do You Know Where Your Wisdom Lives?” and “Call Me Grand,” with a host of moving subtitles that evoke the theme of the section.

There is much to praise about this work. It is exceedingly well written. Verdelle’s linguistic brilliance shines throughout the work. She is as dedicated to wordsmithing as was Morrison, her mentor. She describes her youth as “living on a diet of books and the advice of old women.” She proclaims later in the work that “important library stories backdrop the lives of writers and readers and scholars and regular people everywhere.”

Additionally, the author’s knowledge of Morrison’s works is as vast as it is praiseworthy. At one point early in their friendship, Morrison proclaimed that to know her was to know her works. Her books are a large part of her history. Yet another noteworthy feature of the book involves the author’s assessment of musical genius from Nina Simone to Wynton Marsalis. Notably, she advises, “If you know Nina Simone’s work . . . you know an encapsulated story of Black America. . . . You have an overview of how Black genius cracks through the concrete of racism.”

This powerful work does many things at once: it provides a history of the author; it is an analysis of Morrison’s genius; and it is something of a chronicle of Black history. Verdelle reflects on books that are a bit more obscure in Morrison’s oeuvre, from the Black Book to her many children’s works. It is also laced with subtle humor. Morrison’s foibles are related with subtle comedy. From the way Morrison appropriates the author’s favorite scarf to Morrison’s response to a question about her fine writing with the statement, “I take out every extra ‘the.’”

This is a most impressive work that offers great insights on Morrison as well as the author herself. Verdelle’s deft observations on Morrison, on writing, and on history will linger long after reading the work. Of Morrison she observes, “Toni Morrison’s voice does not quiet; nor does it become less salient or significant.” The statement is also applicable to Verdelle’s efforts in this work.