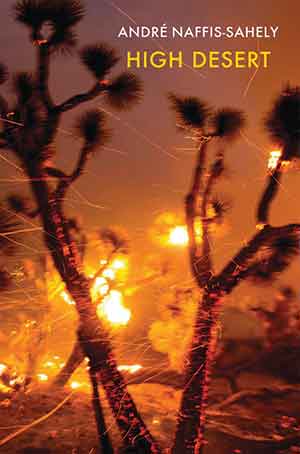 THE TITLE OF André Naffis-Sahely’s second volume of poetry, High Desert, suggests a collection celebrating a specific place, an environment, but the poems of High Desert explore, instead, the illusion of place—or, more accurately, they confront us with the gap between the underlying physical reality of place and the temporary social, political, and psychological realms we construct on it. We take them as if permanent, but these places reveal themselves (if we step back and look carefully) to be akin to the false front on an abandoned building in a western ghost town, emptied, sun-bleached, and listing toward collapse. In this world, what is permanent is loss, or what Naffis-Sahely terms “rootlessness.” The title poem concludes with the speaker, at “this final frontier,” musing that “it’s here, / where after decades of rootlessness, / I abandon all cravings for permanence . . .”; and in this poem, this collection, the concluding ellipsis is not a trailing off or momentary pause. It is a recognition that what is permanent is impermanence and that loss is not the end of the story but also its beginning and its middle.

This in turn leads outward to what makes High Desert especially noteworthy: the way the opening section, Peregrinations, explores dislocations and successive relocations in a global context so that American terrain and American tropes and American history are reconfigured as an instance of the global. Instead of casting the American as an alternative to the global, Naffis-Sahely reinscribes the American within the global. The poems in Peregrinations underscore that exile and impermanence are universal. There are simply different histories and registers of dislocation. In “Tule Fog,” the poem that serves as the collection’s coda, the speaker asks, “what does home mean to you now?” And the answer that “rises” out of the fog is that “home is a sleeping bag in a parking lot, / a bedroll in a barn, a blanket laid down / in a ditch, but never a right, never a certainty.”

The global perspective is also fundamental to the collection’s political vision. In “The Last Communist,” the collection’s opening poem, the speaker is “sift[ing] through his father’s papers” after his father’s death. Taking up his father’s “final Iranian passport, he notes “the Islamic / Republic’s seal printed atop / the Shah’s lion,” one oppressive regime replacing another, two regimes understood as a single reality within history, “illustrating how horrors / beget only / more horrors.” Whether the father has been a political prisoner of the Shah’s secular regime or the Islamic Republic’s theocratic one is unclear and makes little real difference. Similarly, these two “horrors” anticipate and align with the horrors of the colonial exploitation of Indigenous peoples, the exploitation of workers in the American Southwest, the violence of the Tulsa Race Massacre, and other oppressions developed most fully in the fourth section, A People’s History of the West, where critique emerges from the interplay of the witnessing voices allowed to speak for themselves, and as the poet draws them into an interdependent collage in a manner that bears some kinship to Edgar Lee Master’s not-quite-forgotten Spoon River Anthology.