So Distant from My Life by Monique Ilboudo 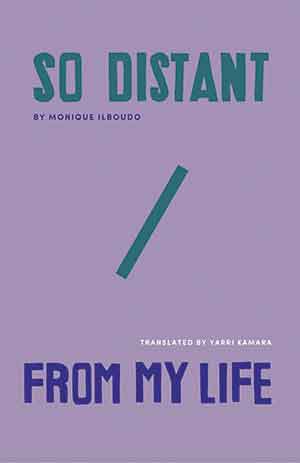 MONIQUE ILBOUDO IS a poet, novelist, defender of human and women’s rights, including rights to determine one’s own identities and conditions, as well as their fundamental freedoms, such as the freedom to move, to migrate, to emigrate, and to choose. Much of her attention in her novels, as well as in her working life, has been specific to women in West Africa. Her first novel, Le Mal de Peau (1992), won the Imprimerie Nationale du Burkina. So Distant from My Life is the third of her four novels and the first translated into English. Two themes dominate: migration and sexual orientation.

Set in West Africa and France, So Distant from My Life is a first-person narrative told by Jeanphi, a young man whose dissociation drives the early stages of the novel. This broadens to an identity crisis, one signaled on the opening page, where upon waking, his mind runs off, followed by his body. He spends the next three years living in the streets. His desire is simply to leave the life he is living. His aspirations jell early on: to go to Europe, make a lot of money, and return to West Africa to live well and flaunt his good fortune. By the latter half of the novel, his goals shift for his return to West Africa, initially to advise disaffected youth about emigration and later to help them develop social and employment skills that will allow them to succeed. Ironically, his funding comes from sources that want him to convince the young not to leave. Worse, he is disappointed that they do.

After two failed attempts to immigrate to France, Jeanphi is taken on as an assistant to an elderly white French gentleman, Elgep, who has given extensive philanthropic assistance to the region. As Jeanphi assumes increasing responsibilities in Elgep’s organization, their relationship grows closer until Elgep inadvertently reveals his attraction with an indiscreet look. The sequence of events is compelling: the broadening of a young man’s sexual world along with the awakening of his own self-worth, a consultation with a priest who argues over sins, his wedding to Elgep, his eventual leaving Elgep to return to West Africa to do philanthropic work of his own, his attraction to younger men, and the social constructions that drive human interactions as we come to the tragic ending.

Ilboudo develops complex human relationships, richly figured and situated in the particulars of the times and spaces her characters occupy. More compelling is how they drive the narrative and what they reveal about Jeanphi and how he comes to understand that he himself has made the choices he has, including his evolving values and actions. For readers, what Jeanphi fails to notice about himself and the world is compelling.

The poet is evident in Ilboudo as well as in translator Yarri Kamara. The novel is lyric in its language and structure, not only what and how Jeanphi attends to the world but in how Ilboudo structures Jeanphi’s movement through it.