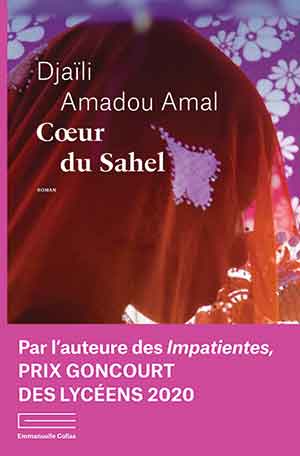 THE CAMEROONIAN NOVELIST Djaïli Amadou Amal (b. 1975) is best known for Les Impatientes (2020), which illustrates, from the contrasting perspectives of three main characters, the consequences of polygamy and arranged marriages on young women. While gender is the principal dividing line in Les Impatientes, the focus of Cœur du Sahel, Amal’s most recent novel, is the apparently unbridgeable divide between social classes (including the vestiges of Cameroon’s caste system). In Les Impatientes, the recurring word is paradoxically “patience,” repeated by the elders to each young woman who was coerced into an unwanted marriage. In Cœur du Sahel, the oft-repeated phrase is “nous ne sommes pas du même monde” (you and I come from different worlds). What this novel reflects is found in many of the countries on the African continent: the stark economic and cultural contrasts between a growing, relatively prosperous urban middle class and the less-educated rural villagers who are still trying to survive on subsistence agriculture.

Faydé, the central character, has grown up in a farming village that is now being hard hit by both lack of rain and periodic attacks by the jihadi terrorist group Boko Haram. Faydé’s father disappeared during one of those attacks, and her mother is left trying to work the land while raising Faydé’s younger siblings. Faydé decides to do what other teenagers in her village have done: go find work as a domestic servant in Maroua, the biggest city in the area. This will allow her to send some money to her struggling mother. Faydé thus transitions from a remote village without electricity or running water to a regional center of commerce, a bustling metropolis with a university and other impressive buildings. Thanks to her extended family, she is hired by a wealthy household that includes—in an echo of Les Impatientes—one husband and three wives. The intelligent but initially naïve Faydé will quickly learn that she is, in terms of class, gender, as well as religion, at the very bottom of a rigid social hierarchy. Perhaps predictably, she will fall in love with an educated young man who is part of the local elite, but this will not be a typical Cinderella story.

Amal writes about what she knows. Much of her own background—a Fulani Muslim woman from northern Cameroon who went through an arranged marriage at the age of seventeen—is present in her fictional work. She also clearly wants her readers from outside of Cameroon to learn more about her world. The narrative is preceded by a map of northern Cameroon, showing the main cities and the neighboring countries. The is also a map of the Sahel, the vast swath of semiarid land that separates the Sahara Desert from the lush coastal regions of West Africa. Throughout the novel, the author incorporates brief explanations about the socioeconomic and religious realities of the northern regions of Cameroon, a very diverse country with over 250 languages. The ultimate destruction of Faydé’s village by the Boko Haram terrorist group, for instance, is an all-too-realistic pivotal event in the novel’s plot. Also mentioned are global trends and events, from the foreign telenovelas that city-dwellers watch on their television sets to the disastrous effects of climate change on local farmers.

In a country with a rich literary tradition, Amal confirms with Cœur du Sahel that she is one of Cameroon’s most important living novelists.