The Dreaming: Stories by Andre Bagoo 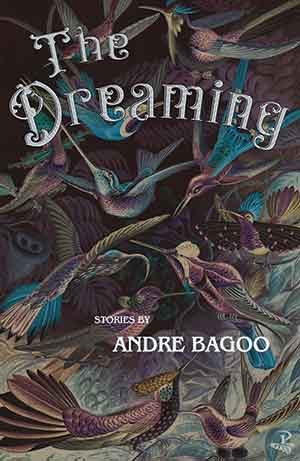 ANDRE BAGOO’S The Dreaming explores the lives and dreams of everyday gay Trinidadians through the short-story form. The Dreaming is Bagoo’s first foray into short stories, having written four books of poetry and a book of essays. Deftly and carefully, Bagoo critiques the culture of exclusion each of his various Trinidadian subjects experiences—while fully demonstrating his craft as a writer.

Given the subject of most of the stories within this collection, Bagoo strives and succeeds in creating fully realized gay and queer characters whose sexual dreams and identities are not just a source of fodder for neoliberal narratives that broadly paint LGBT+ peoples from the Caribbean as agents without a voice. That’s not to say that such narratives do not exist—there are moments of tension within Bagoo’s work where the queer and gay characters experience discrimination—but they are just blips in the greater narrative construction of the collection. Bagoo forgoes grounding such narratives within this work. Instead, he spends much of his work exploring gay sexual desire, pleasure, the complexities of same-sex relationships, and human connection through keen characterization and first-person narrative. Of importance, not all Bagoo’s stories are inherently gay or queer. In fact, interspersed throughout the collection are other Trinidadians who experience heartbreak and loss alongside their gay counterparts.

Bagoo’s ability to fully realize characters in the span of a few lines and pages makes each of the stories in this collection stand out. Characters reappear in later stories, coming in and out of the narrative that seems to underpin each fiction, reminiscent of other diasporic writers from the Caribbean like Edwidge Danticat. While some might suspect Bagoo of recycling certain gay tropes—obsession with the gay Adonis or the failure to retain meaningful relationships—he does the opposite, creating uniquely gay Trinidadian identities that critique such tropes. Thus, each story delves deeply into the minds, desires, and dreams of the various gay personae that make their presence known throughout the interconnected stories—each story and character more tender than the next.

Bagoo begins the collection with a heartful story, “Haircut,” in which the narrator reflects on the inability to receive a quality haircut in juxtaposition with his failing relationship—highlighting the ways people ignore the needs and desires of others and the ways we become complacent in failing to articulate our own. Bagoo plays with narrative form in stories like “Selected Boys: 2013–2016,” where the narrator, in diaryesque passages, recounts the various attempts he and his partner make in “an open relationship,” which he is not necessarily fond of—marking each sexual encounter with the name of the man entering and exiting the relationship. Most stories within the collection explore the complexities of relationships alongside the tensions between sexual desire and sexual fulfillment. Each story always ends with a glimpse, some sense of hope, or a dreaming of things that might yet be.

Furthermore, Bagoo draws connections between the island and his gay characters—showing that such dreams are an important aspect of the national imagination and challenging the assumption that gay men do not belong. For example, the short story “Prelude” depicts a young Trinidadian man named Finn who escapes the abuse of his father for being too feminine by studying in London. There, he discovers a different form of discrimination—he is never posh or good enough for the gay English men he meets, and he encounters various forms of racism. Upon returning to Trinidad and before reuniting with his family, Finn stays at a beach house where he finds a dead dog; he reflects upon the bleak omen: “I wanted Trinidad, but did Trinidad want me?” Yet he is not deterred and spends the night with his male taxi driver: “He kissed me. And it was as though I was swallowing the night sky with its diamond stars, the black ocean with its orange welts of oil rigs in the distance. . . . I held his dick in my hand, and I felt I was holding some heavy fruit, some memory, some dream.” He wakes the next morning fearing that it was just a one-night stand and heads to the beach: “the aquamarine waves beckoned, their alternating allegro and adagio speaking of some happiness to come . . . and there he was, on the sand, walking towards me.” Thus, Bagoo connects sexual encounters to the physical landscapes of Trinidad—connecting the dreams of the gay men he writes into existence with the dreams of the island.

With wit, humor, and tenderness, Bagoo shows the complex nature between race, gender, sexuality, and nation while demonstrating that gay Trinidadian men have stories to tell.