Struggle and Mutual Aid: The Age of Worker Solidarity by Nicolas Delalande 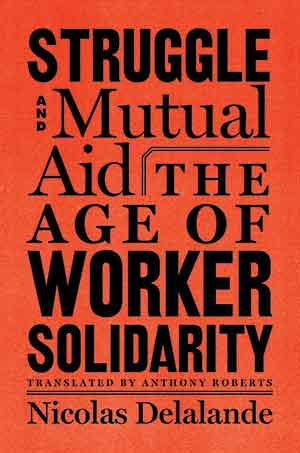 PUBLISHED IN FRANCE in 1999, Nicolas Delalande’s Struggle and Mutual Aid is a mainly Eurocentric study of the International Workingmen’s Association (IWA), founded in 1864, and its legacy. The First International, as it is commonly known, established many of the features of trade union organization; it is largely in terms of organization that this history is cast. The mutual aid to which the title refers is inseparable from the organization of the IWA and its subsequent iterations.

The support the IWA provided, or withheld, was really a function of its structure and, unavoidably, the context in which it operated. Thus, ideology takes a decided back seat for Delalande, though that aspect is ever present during the times under examination. What is far more obscured are basic social institutions that take shape as formal labor bodies appear and evolve, as with the course of any modern institution or formation.

I think it is necessary to take a look at basic dimensions in order to grasp the meaning and background of Delalande’s terms, the most commonly used one being “solidarity.” Émile Durkheim may be said to set the stage with his distinction between premodern “mechanical” solidarity versus modern “organic” solidarity. He upheld division of labor or specialization as fostering the cooperative nature of organic solidarity. This is fundamentally at odds with the reality of modern anomie and subjugation. Delalande does not acknowledge his debt to Durkheim, but Struggle locates its very foundations on such a valorization or elevation of division of labor. Industrial society itself has no other more primary basis, the “solidarity” of the narrowed machine worker, reduced to a role, a cog in a machine.

Karl Marx, a key figure in the First International, proclaimed early on that liberation would only be achieved through the abolition of division of labor, that most basic social institution. Where the individual “could hunt in the morning, fish in the afternoon,” Marx saw that specialization introduces distinctions of authority and pits “man against his fellow man.” Later on, embracing the industrialism that Delalande completely takes for granted, Marx, Mr. First International, fully embraced the division of labor. Only when the proletariat is united in the factories will it become the liberatory force required for revolutionary victory in the class war. Going forward, Marx clearly predicated liberation on the existence of factories, of industrial wage slavery.

In England, the focus of much of Struggle, textile mills were among the first factories in the late eighteenth century. By various means, and against the backdrop of advancing enclosures (forced conversion of communal land into private property), people—mostly women and children—were forced into the factories. There, they toiled long hours. Subject to industrial discipline (e.g., trained to obey the clock), they were driven to a further stage of domestication. Robbed of time and energy, they were hardly the Mighty Proletarians of Marx’s dream. Much more refractory, and given to rioting, were independent craftsmen, such as the handloom weavers who resisted proletarianization, even, in some cases, to the point of starvation. They rejected “solidarity” in favor of their autonomy.

In the United States, the Millerites (later known as Seventh-Day Adventists) announced that the world would end in 1844. In a sense they were right; a world did end by that time. Industrialization and the factory had come a bit earlier in Europe, and by the time of the First International in the 1860s, the earlier world of home-based family workshops had definitively come to an end.  The IWA itself came to an end in 1872, after failing to give much mutual aid or intellectual support to the survivors of the defeated Paris Commune the year before. It was moved to New York, and its effort expired. The European branch was occupied with questions of regional communication and cooperation. Based in London, its backbone was English trade unions, almost invariably less militant and radical than those on the continent.

In its short life, the IWA faced a managerial question or tension. As with its component unions, a tendency toward professionalism and bureaucratization was there from the beginning. Some saw this as a pitfall much earlier. The practice of choosing union officers by lot and/or for fixed terms was tried in some English unions but was abandoned as a seemingly inexorable move away from democratic and participatory organizations took hold. Along these lines, it is worth nothing that Delalande simply takes for granted the identity of union and worker. It is possible to approach this very differently, to examine unionism as a disciplinary or carceral institution.

The IWA was often reluctant to provide help for strikers who were violent. In 1867 ironworkers in Belgium and textile workers in France were involved in union strikes that led to violence, leading to IWA condemnation. This antipathy to militancy on the part of beleaguered workers came to the fore regarding IWA attitudes toward the Paris Commune. Marx and the First International did not support the Commune initially and only grudgingly gave aid to its refugees. This was widely seen as traitorous to Communards. But Delalande’s account seems to favor IWA policy in this area and applauds the fact that “its practices survived.”

The book’s final section is called “The Years of Consolidation.” Clearly, maintaining organization qua organization always came first. The IWA’s later iterations were pragmatic, conservative in the main, and given to centralizing approaches, such as federations. In 1889 the International Workers’ Congress came into being, a sort of reassembled IWA. In fact, it was referred to as the Second International. The center of gravity shifted by the end of the century to Berlin, and Germany’s well-heeled unions.

Struggle and Mutual Aid is not much concerned with context, including the significant radical currents of the times. Thus the book, while informative, lacks depth, focusing too much on organizational minutiae. The massification of workers was steadily on the rise, with the steady rise of industrialism. Delalande sees a symmetry of labor and capital, counterparts in an overriding process. Again, there is a fixation with organization (e.g., “the social conflicts [of the decade] of the 1900s clearly showed the new breadth of international worker solidarity and the variety of its outlets, as well as the concentration of its original focus”). Nineteenth-century globalization “produced many new types and conditions of international solidarity.” In other words, it is global capital that shapes labor’s forms, not independence from it.

In a concluding, sweepingly uncritical vein, the book’s final sentence sums up Delalande’s appraisal: “The integration of solidarity into the mechanisms of globalization remains more than ever the greatest task and duty of humankind.” Tell that to fishermen dispossessed by oil rigs or communities suffering from cancer caused by toxic waste.