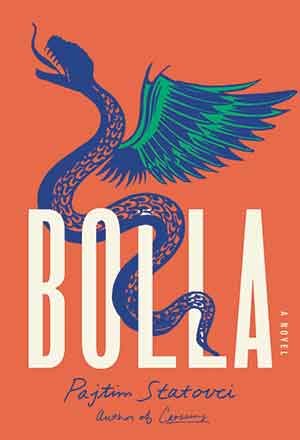 “EVERYTHING IS ALWAYS framed through the prism of war.” This line that occurs toward the end of the novel Bolla is a key to the driving force behind its narrative: the savage, dehumanizing impact of war, both on societies and on the individuals that form them. Pajtim Statovci, himself an Albanian displaced from Kosovo to Finland by the Yugoslav conflicts of the 1990s, has written a disturbingly powerful excavation of lives engulfed in war and its aftermath, begging questions about the baleful nationalist politics at its root and the fractured relationships and families it leaves in its wake; questions that feel all the more timely and emotionally charged now that war once again rages in eastern Europe.

Although Bolla is written in the Finnish of his adopted homeland, Statovci builds on the dark “magical realism” of eastern European novelists like André Kertész and László Krasznahorkai, melding passages of disquieting brutality and abuse with lyrical flights about erotic love and ephemeral moments of togetherness. If the overarching plot is the story of Arsim—a young aspiring writer who is forced to flee from Pristina to Serbia with his wife and children—the novel creates a rich, multilayered narrative by segueing Arsim’s first-person confessions with italicized passages, lineated like poetry, whose speaker is unstated but seems to be Milos, the Serbian medical student whom Arsim had met and with whom he had fallen in love in Pristina. Memories of his unhappy childhood and of his horrific experiences as a surgeon at the frontline of war are intercut with excerpts of myth and folklore, which widen the tragedy into universality and again pull the reader’s experience away from conventional linear realism.

Leading a hollow existence as an immigrant factory-worker and reluctant father in Serbia, Arsim is a victim of war and displacement but also of the homophobia that makes him suppress his true nature and abandon Milos, his moral compass shattered by processes of othering that carry him helplessly forward. He stumbles into a sordid liaison with a teenager, which lands him in trouble with the authorities and results in prison and deportation. Only back in Pristina, rejected by his wife and family, does Arsim begin to recover some sense of self-direction, finding a job and reenrolling at the university to return to his literary studies. He also resolves to locate Milos, but here the novel works to defy the obvious narrative arc of happy reunion and redemptive plot-resolution for the two protagonists.

By the time we reencounter him, Milos is very much a casualty of his experiences at the front, a helpless, nonverbal shell of a man who—the novel implies—will end up on the streets. In a shocking act of cutting himself off from his past, realizing their love can never be resuscitated, Arsim leaves Milos to start a new, more settled life. If the book can be said to have a happy ending, it is in Arsim finding his feet as a writer, ironically facilitated by a farewell gift of money from his ex-wife.

The book’s title resonates throughout the text: bolla is both the Satan-like snake-creature that haunts the mythological passages of the book and features in Arsim’s first story as well as the alien outsider, turned monstrous through war, that both Arsim and Milos become at different points of the narrative. Statovci’s prose is a sinuous, supple instrument capable of rendering equally well the visceral brutality of conflict, the dismal anomie of postbellum city life, and the compulsive sensuality of a secret love affair. His heightened style often hits on effective, startling metaphors but at other times employs extravagant tropes that don’t quite land (e.g., “remaining silent gobbles up the rest of summer like a fistful of air”). Perhaps this is an issue with translating between Finnish and English, which for the most part David Hackston appears to have made an excellent job of.

This English edition of Bolla should bring many new readers to Pajtim Statovci’s remarkable, compelling novel.