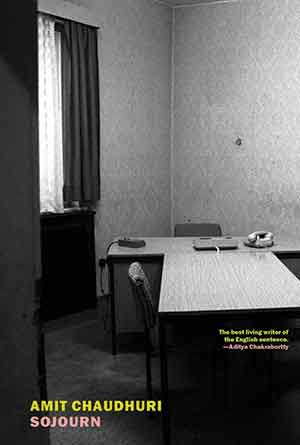 AMIT CHAUDHURI HAS always been a writer in whose works a place comes alive like a fully delineated character. In his first novel, A Strange and Sublime Address, he transformed the city of Calcutta from the mundane to the magical in the consciousness of a young boy visiting the town of his ancestors during summer vacations. In his latest novel, Sojourn, we experience the palimpsestic history of Berlin through the impressions of the narrator, an Indian writer visiting the city on an academic appointment. The consciousness of an outsider provides an entry point into multiple layers of Berlin’s past. The Indian Bengali writer is quickly befriended by a Bangladeshi poet, Faqrul Haque, living in exile in Berlin.

In early peregrinations around the city, Faqrul introduces the narrator to remnants of Berlin’s darker past during the Holocaust, places like Grunewald, from where “they sent Jews to the camps.” On another walk around town, Faqrul points out to the narrator the synagogue that had been destroyed during Kristallnacht. However, these traces of a violently racist history are not confined to the remote past. Faqrul was beaten up by neo-Nazis in 1992, who he claims came from the East. The history of anti-Semitism fuses with the history of Berlin’s status as a city divided by the Cold War and reunited after the fall of communism. The narrator gets acquainted with a Canadian political scientist. Over an insipid lunch, they bond over the strangeness of being in a post-Soviet world. After having always lived in a world structured around two political systems, they inhabit a momentary void in political and geographical boundaries.

This sense of being unmoored from a stable world of political affiliations and predictable interpersonal relationships intensifies as the narrator’s stay in Berlin continues. The friendship with Faqrul is punctuated by abrupt breaks in contact. Professional acquaintances are similarly limited, producing a feeling of isolation and disconnect from the city, its history, its people, and languages. It is in the midst of this that the narrator begins a desultory affair with Birgit, a woman who attended his inaugural talk and is a postdoctoral researcher on labor movements in South India. From the onset of his affair with Birgit, the narrator begins to suffer temporary lapses in his memory, not only a sense of being lost in the city but an inability to remember what exactly has happened in the encounters with his paramour. On one occasion, they engage in a sexual fantasy of role-playing that ends up with their return to his university apartment. However, when he wakes up, he is not even sure who he came home with. This confusion is exacerbated when Birgit leaves without warning in the night and is incommunicado for several days afterward. This precipitates the narrator’s loss of bearings. He goes searching for her in streets they have walked and suffers a loss of consciousness. Although Birgit returns with a perfectly credible explanation for her sudden disappearance, the narrator’s sense of unraveling continues to the end of the novel. In the last scene, he has collapsed into a stupor in front of a building with a blue balcony and is questioned by a woman whether he has fallen asleep.

The novel ends with a sense that this time in the narrator’s life is a transient episode like his temporary appointment, his affair, and the itinerant friendships. Being plunged into a new city with its multilayered traumatic history somehow unhinges the narrator’s settled routines and grasp of his own subjectivity. The novel does not explain the causes of this mental collapse to amnesia and disorientation; however, the sense of discombobulation precipitated by new surroundings is something very relatable to readers who have experienced the ruptures introduced by global travel, differences of time zones, and linguistic and cultural changes.

Reading this brief novel and following the narrator’s journey in Berlin approximates the surreal condition of drifting between time zones, being unsettled in one’s habitus. While this is the specific condition of one traveling writer, it approximates the global condition of forever being on the edge of some public or personal disaster and having a very tenuous hold on normalcy. The evocation of this precarity of contemporary life makes Sojourn a familiar condition of twenty-first-century transnational modernity.