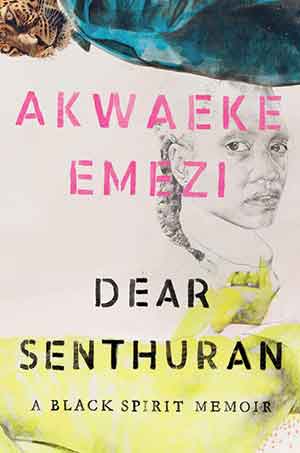 DEAR SENTHURAN IS Akwaeke Emezi’s first memoir in their prolific and growing catalog. Emezi’s “black spirit memoir” is about their existence as an ọgbanje, the liminal state between the fleshly and spirit worlds, which is just one example of in-betweenness or even otherworldliness explored in the memoir. Its epistolary chapters allow Emezi to investigate numerous discrete topics that fall under the larger theme of identity: gender, creativity, nationality, success, illness, family, and attraction, to name only a few. Each letter written to a specific person creates a space for memory to connect with Emezi’s ideas on the topic at hand (e.g., “Masks,” “Home,” “Grief”).

In this work, Emezi bares their many souls to the reader, just as they have done with other protagonists—the only difference is in this text Emezi is the protagonist, though they intimate several times that Freshwater (2018) found much of its foundation in Emezi’s life. Readers learn how dangerous the first novel’s success was to Emezi. The descriptions of their attempts to die by suicide are vivid and upsetting in all the ways a memoir should be. Embodied tension—both having to do with gender and with being an ọgbanje—first is a liability to Emezi, but eventually they show through the memoir how they continue to work toward affirming all their identities.

For example, in their letter to Eugene on mutilation, Emezi describes disgust with their uterus and the desire to expunge it from their body. Finding a doctor that would perform gender-affirming medical interventions proves to be challenging, and when Emezi finds one, the doctor complains of spending too much time with them because of their “in-between thing.” The essay, like many of them, ends with a reclamation of self in the face of a human world that does not allow for the space someone like Emezi requires to survive, much less thrive. Emezi sees “mutilation as a shift from wrongness to alignment, and of scars as a form of adornment that celebrates this shift,” a sentiment that encompasses the memoir in its entirety. Emezi shows their scars over and over, how they came to be and how they almost destroy Emezi. Yet, in the end, the memoir shows Emezi’s continued commitment to aligning with all their truths in face of a world in which “humans are so loud in how they press down, in how they enforce their realities.”