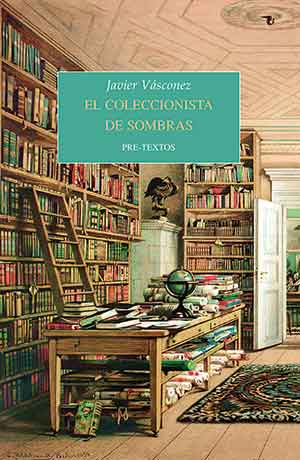 STOP ME IF you’ve read this: a Latin American writer puts his own name within quotation marks to retell some of his life and of his novels. Supplementary partial stories from other characters, real or fictitious, are embedded within that tale. That’s Javier Vásconez’s conceit in his latest novel, and the best component in its construction is that “Vásconez” is aware that there will be questions or comparisons. What to do besides letting readers wonder about stories and their recorders? For one, never wink at the readers, make it all seem new, present memory as imperfect, tread a line between responsibility to readers who may not have read you and those who have.

The real Vásconez walks that tightrope with equal measures of manipulation and negotiation, blending the maudlin with some myths created about him, enriching the historical record with even more fiction. Thus, the eighteenth and final section reads like a literary testament or synthesis, feasibly an explanation of his poetics or even a farewell. The kernel for these actions and inactions is that a writer named “Vásconez” is contracted by Count Aldo de Velasteguí (a social rarity in Latin America) to write a history of his estate, La Circasiana, which includes a casino where what is really at play is sociopolitical power, gambling being ever present in Vásconez’s fiction.

Denise, the corrupt and monstrous count’s partner, despises the ne’er-do-well aristocrat’s misogyny and eventually becomes the insomniac “Vásconez’s” lover and informant, and by extension one of the novel’s protagonists. But the chronicle gets out of hand (the count is a journalist), and “Vásconez” ends up imagining, intuiting, remembering (mainly his own youth) or resurrecting much more than the facts or the past, in an ambience where “everyone seemed to live from suspicion.” In the crucial seventh section, while pondering whether writing is time suspended, he asks: “If the history of a city or a country is unstable and turns out to be little convincing, isn’t its literature its secret history?”

Vásconez’s recurrence to locales (here, Paris and Spain), characters, and narrative devices of the novels that make him one of the two most important Ecuadorian novelists of recent decades can be construed as a poetics of obstinacy—and he has every right to continue practicing it. His effort largely succeeds in El coleccionista de sombras, a sober title whose meaning depends on an aesthetic ménage à trois (he, his previous autobiografiction, this novel). Most of the sections that make up the novel have “Vásconez” as a protagonist or as an all-knowing presence privy to the roles other characters play in conventionally dark plots. It is a well-known strategy in self-begotten fictions; the novelist knows it, and thus, more than enhancing it, he tries to keep his art and his life as remote from each other as possible.

But he recovers some of his prominent characters, familiar to assiduous readers of his previous novels (Roldán, Dr. Kronz), while others have cameos. That is not whimsical self-indulgence because it suggests something more, as in El viajero de Praga, La sombra del apostador, or Invitados de honor, three of his best works. El coleccionista de sombras’s omniscient narrator purposely makes readers believe the author cannot control his characters, accomplishing that goal by referencing or quoting Vásconez’s favorite authors, Dostoyevsky, Conrad, Juan Benet, Kafka, Faulkner, and Onetti among them (i.e., the novel’s other collected shadows). His aim to define or clarify some behaviors or incidents is sometimes muddled by repetitions that work against the novel, especially if one knows the characters. Nevertheless, the novel’s reception in Ecuador and Spain has been nothing short of positive (Vásconez’s novels have twice been finalists for the prestigious Rómulo Gallegos Prize).

John Hawkes famously said that the novel’s worst enemies are plot, character, setting, and theme. Vásconez, rightly considered the precursor of what has been called the “Andean gothic” practiced by recent women authors, never heeds that advice. Yet his approach in dealing with the count’s vampiristic traits can often result in stilted phrases, particularly when describing atmospheres based on photographic images. To my mind, El coleccionista de sombras is a throat-clearing for more substantial future works, hopefully without the shadow of elements of dramatization that depend on framing and distancing previous works, no matter how subtle.