Laughing with the Trickster: On Sex, Death, and Accordions by Tomson Highway 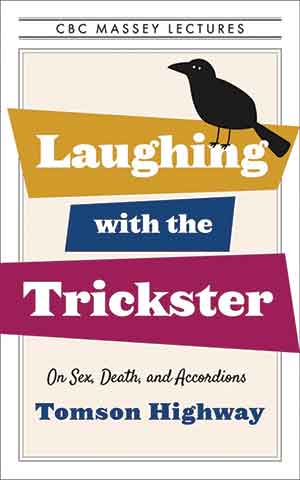 WRITERS AND THINKERS have presented Canada’s Massey Lectures since 1961, published to accompany CBC broadcasts; Tomson Highway delivers this year’s series in five locations nationwide. Also a dramatist and composer, Highway hails from the Cree nation, near the northern border of Manitoba–Saskatchewan. His people are “not quite Arctic, for that great honour goes to the laughter-loving Inuit,” but close enough to call them kin.

Discussing creation, Highway contrasts monotheistic and polytheistic mythologies with pantheistic Indigenous mythology. “In Cree and other Algonquian languages, the world is Mantoo, meaning Spirit, not a ghost but an energy”—represented as neither a man nor a woman but a thunderbolt. A pantheistic model embraces “the level of nature,” whereas monotheistic and polytheistic superstructures view inhabitants as being on the level of divinity or humanity.

In “On Sex and Gender,” Highway presents the Cree word that translates into Two-Spirits: “Whether they came into this world male or female biologically, they are people who have the souls of both genders at one and the same time.” And, finally, “On Death” explains it’s neither a tragedy, nor an ending, but “the most breathtaking passage you will ever take in what one hopes will be a long and happy life enriched by the laughter of a certain clown.”

The trickster infuses Highway’s narrative; his stories (including myths he retells) are fueled by a gentle and affecting humor (officially the third lecture’s theme). Even when confronting the “horrors of European history,” the “Indigenous collective racial memory of this catalogue of misery, this collective crime of the dreaded human race,” this energy persists: “A laughing deity virtually governs the way our tongues move, the way our blood flows, the way our lungs pump, the way our brains pop, dance, and sizzle.”

Highway concludes by musing whether readers/listeners will continue to allow “the patriarchal God of monotheism [to] continue destroying the planet with his straight line of aggression” or allow “the Mother Earth of Indigenous pantheism [to] preserve it for her children, for our grandchildren and great-grandchildren, with her womb, with her great, never-ending circle.”