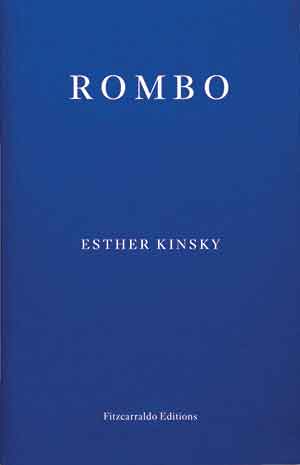 “EVERY LANDSCAPE,” American geographer D. W. Meinig writes, “is an accumulation.” Within it, “the past endures.” Writers concerned with this relationship between landscape, place, the environment, and history/memory have underscored this inevitable accumulation in their works; W. G. Sebald will immediately come to mind. German writer Esther Kinsky too grapples with these themes throughout River (2018) and Grove (2020) and now in her latest novel, Rombo (2022).

The landscapes in Kinsky’s novels have always offered themselves up as sedimentary texts, where collective and individual traumas, memories, and histories are piled atop one another, laid to rest, later erased or deposited anew. Kinsky’s peripatetic narrators are always attuned to the particularities of the landscape (urban and natural) before them, active wanderers participating in a process of remembrance. In Rombo, however, Kinsky’s wayfaring narrator becomes a chorus of people affected by two natural disasters: the devastating earthquakes in May and September 1976 in northeastern Italy, in which a thousand lost their lives and tens of thousands were displaced. Buildings and churches turned to rubble. Ceilings collapsed in dust clouds of mortar. Well-worn paths were forever disrupted. Rombo takes its name from the phenomenon of il rombo: the deep, unfamiliar, and subterranean rumble felt and heard just prior to a quake. For the inhabitants of Friuli, this rombo haunts. It is an acoustic scar always lurking in their memories. Every rip of thunder is forever a reminder of this experience that “cannot be erased or redeemed, because it is beyond the categories of good and evil.”

Rombo alternates between the accounts of seven inhabitants in a remote Italian mountain village: Olga, Silvia, Gigi, Toni, Mara, Lina, and Anselmo. These accounts, which can be contradictory or inconsistent, read like interviews or oral histories, forming a kind of documentary chorus. This chorus of layered voices ultimately mirrors what Kinsky calls “the unreliable witness that is terrain.”

In their accounts, these characters reflect on a way of life in the middle of being lost. They are engaged in a process of reinscribing their memories into a completely changed landscape. Shafts, cavities, chasms, crevasses, and cracks in the earth become apparatuses of memory, remembering, and forgetting. Indeed, as the narrator notes of karstic limestone, rock comprised of living organisms, the landscape is “an accumulation of life lived and life’s traces,” always prone to “weathering” and “erasure.” Even the structures, vehicles, and objects seem to carry this burden of accumulation—when toppled and crushed, Kinsky’s descriptions conjure up corpses. Their loss is just as devastating. Indeed, for Lina, this landscape is her life, where she knows everything, “every stick and every stone.” Every dwelling and every path.

Kinsky’s novel also incorporates the anecdotes of a nameless narrator—akin to ethnographic diary entries—about the land, its flora and fauna, and shared myths. The reader moves from the oral history of a villager to a careful examination of a moorland orchid to an investigation into the myth of Riba Faronika. Photographs and found objects also play an important role throughout Kinsky’s work on memory, and Rombo is no exception. Each chapter is preceded by black-and-white images of a fresco discovered in the cathedral at Venzone—engravings of a bygone era from a people insistent on leaving behind a trace of themselves. Out of context, these heliographic images also remind one of the traces left behind on carbon copy paper—an apparatus of retaining the past’s traces.

The effect of these entries places these villagers’ accounts, their stories and myths, and the minutiae of the region’s flora and fauna on an equal plane. In this way, Rombo offers a kaleidoscopic portrayal of a landscape, inhabited by the traces of innumerable people, creatures, tales, and objects. If landscape is an accumulation of our histories and our memories—our identities, too—Rombo asks us to consider the trauma of what is lost, destroyed, and warped in seismic disasters that forever alter this mighty landscape which too can forget, and which can erase every trace of us.

Rombo is meditative, cinematic, and astounding. With remarkable prose, Rombo asks us to think about remembrance, displacement, and feeling at home in a landscape that always carries the potential to crumble beneath us, collapsing our monuments, diverting our rivers, and burying our keepsakes. The inhabitants (human, animal, and inanimate) of Friuli ask questions that nature and its terrain-changing obtrusions demand of us: What will we do if we must abandon this piece of earth? And where will we go?