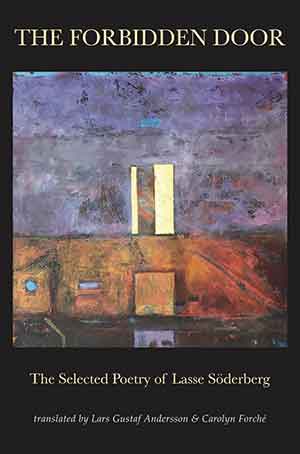 THIS VOLUME IS a wonder. Drawn from nineteen books of poetry (out of the more than thirty he’s published since 1955), The Forbidden Door represents a major English-language addition to the work of the seminal Swedish poet Lasse Söderberg. Although less spartan and craggy, somewhat more generous with words than Swedish compatriot and Nobel laureate Tomas Tranströmer, one can detect a cultural affinity between them; Söderberg even has an early poem dedicated to Tranströmer, from 1959: “You know the broken history of things, / the alchemy of stones, a world masked / in the blind light of God.”

Söderberg’s words form frames of thoughts, which, austere and concrete, can elide just as elliptically as those of Tranströmer. Here it is in the title poem from this book, “The forbidden door”:

Do not try to break in.
No one has lost the key.
It flows like water.
It is heavy as a stone.
It is one with the hand.
As volatile as one
with it as a gesture.

Given such a long career arc—the poet is now in his nineties—condensed into one generous collection, we can witness Söderberg’s development, from the purely austere through the realm of the political (“The nights of stained velvet / have stolen away from the houses, / rustling like green banknotes / that have whirled all the way to Miami,” from 1972’s volume, A Rose for a Revolution) straight through to the more purely condensed and metaphysical (“The tree breathes in, the shadow breathes out. / If there were no trees, we wouldn’t dare to die,” from the 1991 poem “In the Willow Pond Park”) and beyond, back to a more hybrid existence.

We are further gifted by having these taut, shimmering translations by Carolyn Forché together with Swedish poet and scholar Lars Gustaf Andersson, a cooperation that began more than twenty years ago. This is the oeuvre of a major world talent—if there is anyone left to listen. There are ample forays into the prose poem format (“I arrived in Comala where everyone was dead. The starving dogs were also dead even though I could hear them bark”). Poems of short, clipped lines alternate with long-lined poems. Yet the voice is a steady constant, a massive, grounded presence, speaking forth the nucleus of human life in actual words.

There is something about sitting with this work of expansiveness and depth, rendered in such fine English—like returning to source, to replenish, to reconnect with the all-in-all. It is the essence of what poetry can be; I couldn’t recommend it more highly.