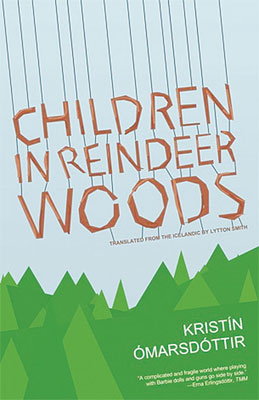 In the opening scene of Children in Reindeer Woods, Rafael and some fellow soldiers come across a farm. The soldiers murder its civilian occupants (men, women, and children) in cold blood. We learn nothing more of the newly deceased. Rafael then turns on his cohorts, dispatching them with ease and without remorse. This is the last killing he will do, he hopes. Rafael is tired of war.

Having hid in the bushes, Billie escapes the atrocities. The former soldier immediately takes a liking to the young girl and assumes a guardian role. At gunpoint, Rafael forces the child (who got dirty crawling around in the dirt) to undress, bathe, and then to play with her Barbie dolls, as if this day were like any other. Billie unquestioningly obliges his every whim. The mood is disconcerting. Children in Reindeer Woods, Kristín Ómarsdóttir’s first novel to be translated from Icelandic into English, remains unsettling to the very end.

The farm (a home for children called Children in Reindeer Woods) sits in the middle of a war zone. While it remains murky as to who is fighting whom and why, there are hints that a tremendous struggle for scarce resources is underway. Still, Rafael is through with it all. “I’ve gotten tired of killing, Billie,” he confesses. “Killing gives me headaches. I really don’t want to dig any more graves, or to hide any more bodies. That’s not my job as a soldier.”

And so, Rafael takes up farming. Soon after his bloody arrival, he tackles the chores once handled by the murdered proprietors: feeding the chickens, milking the cow, tending to the vegetable garden, and mending the outbuildings. Billie, citing child labor laws, refuses to pitch in and help.

Unfortunately for Rafael and Billie, the war they strive to escape never quite leaves them alone. These interruptions come in the form of visitors: tax collectors, a paratrooper, a nun, and a shepherd, each with their own needs.

The coupling of Rafael and Billie is, on the face of it, dubious at the least, and creepy at worst; how can the two overcome such trying conditions? The parent-child relationship of Rafael and Billie during a time of extreme circumstances is reminiscent of the father-son tandem in Cormac McCarthy’s The Road.

Fantasy, too, exerts itself on the story. A good bit of the novel consists of Billie’s descriptions of her father (who is somewhere far from the farm), a puppet whose fate is determined by masters pulling his strings from another universe. The recurring tangent seems out of place, but the eventual payoff is profound and rewarding.

“Perhaps you think it strange,” lectures a visiting tax collector, “that the tax authority should take the trouble to visit an isolated farm during a war—but even though the world is out of breath, everyone must stick to his role. That’s the only way we’ll make it through this horseplay in one piece.”

The conclusion leaves the reader wondering if Rafael and Billie can pull through, together.