The Infinite Tides by Christian Kiefer 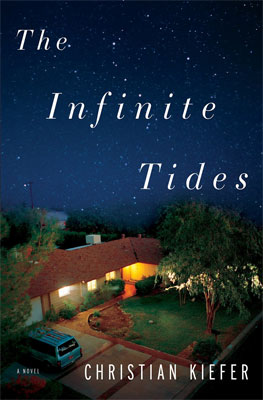 When an astronaut who has experienced weightlessness returns to an almost empty home, afflicted by earth’s gravity, the reader can hardly be surprised that he has little else of character, apart from the numbers and precision essential to his profession.

The almost empty house on a cul-de-sac and long-distance phone calls from his ex-wife are the remnants of a family life that almost didn’t exist. Part of the astronaut’s mind can’t understand why his superiors thought he needed a vacation; his “place” was in Houston, at NASA. The other part of his mind finds it very difficult to constitute an ordinary life in what was his home. A Ukrainian immigrant who scans the night skies with a telescope, the neighbor lady across the way, and Starbucks regulars become his circle, when he is not holed up in his house with sheer inertia and migraines. The loose ends of divorce, selling the house, memories of his daughter, and anxiety about whether he will ever resume a career at NASA lend mental content to his seclusion.

Christian Kiefer manages to enliven a slow-moving plot by flashback chapters of the astronaut’s early marriage, scenes with his daughter, and, most memorably, the triumphs of applied science and action in space. But the plot is not central; the focus is on a certain kind of human being, an engineer consumed by his profession, to the exclusion of natural human affections. He is superior and he is incomplete. His own daughter—similarly gifted in mathematics—tells him she doesn’t want to become like him. The question posed by this character-centered novel is whether Keith Corcoran, the astronaut, can grow into a functioning and sensitive human being. In a novel foregrounding consciousness, the question is openly repeated.

The Infinite Tides is well written, especially the scenes in the space station, when Corcoran is doing what he has always dreamed of doing. On earth, while the style moves things smoothly, there are certainly moments when language can’t quite sustain interest in his vacuous character. Corcoran’s frequent expletives mark short-circuits, when thought stops or stumbles to prevent it from becoming emotional. Late in the narrative, when he decides he needs some companionship and starts to undergo emotional change, it may seem a bit forced, though Kiefer handles the transitional dialogue scenes very well. One only wishes that the author had resisted his professorial impulses at certain points and recognized what was sufficient. In the end, the characters and images could stand alone.