The Fool and the Physician by Andy Brown 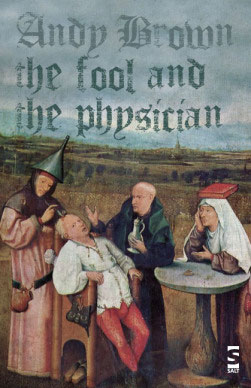 From the mid-1990s, Andy Brown has emerged from the small-press scene to become an important voice in the British poetry revival. As director of Exeter University’s Writing Programme and a former Arvon Centre director, he has also played a significant part in institutionalizing and promoting the growth of creative writing within the British academy.

His recent selected poems, Fall of the Rebel Angels: Poems 1996–2006, made available over a decade of seminal work from his formative years. Sparing and judiciously chosen, the poems show Brown’s gradual movement toward the deep lyric of his collaborative book with John Burnside, Goose Music (2008).

His new book, The Fool and the Physician, continues Brown’s openness to formal experiment, re-positioning and re-sounding a wide and eclectic range of traditional verse patterns. The nineteen poems of part 1 center on the figure of the clown and are, as Luke Kennard observes, as “funny and curious” as they are “poignant and moving.”

In “A Clown in the Moonlight,” which draws on a quote from Lon Chaney, we’re challenged: “How we feel about the clown / depends on where we see him— / a circus or party, no problem, / but ringing your doorbell at sundown?” Brown skillfully displaces our common assumptions with his own poetic clowning, which is simultaneously hilarious, serious, and disturbing in its playfulness and mocking. In “Pretending to Be Me,” he blasts: “I’m two faced, a Janus, inverting truth / and illusion . . .”

But it is in the book’s second part, from which the collection as a whole takes its title, that Brown’s inversions practice their most potent lyric alchemy, “As when the inconceivable bursts through / the surface of our lives” (from “Jeroen van Aken”). Based on the life and work of the Flemish painter Hieronymus Bosch, the poems echo the kind of visceral fetish for bodily particulars, dark secretions, and slitherings found with frequency in their source. Fittingly, Brown is at his most formally amorphous in poems carefully crafted and shaped. And still, despite the fabulously baroque emotive force of poems like “The Garden of Earthly Delights” and “The Adoration of the Magi”—among Brown’s best achievements—there is time for humor: “This painting’s made as an Imago mundi— / where the mundane and the devil’s cargo / fuse in a delicious farrago / of licentiousness à gogo.”

It takes daring and a cool nerve to juxtapose such energetic variety under one cover and keep it under control. The Fool and the Physician does that, and more.