Jerusalem: Chronicles from the Holy City by Guy Delisle 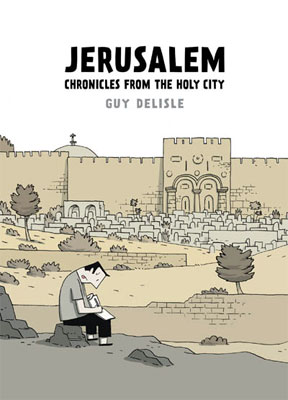 Guy Delisle is comics’ travelographer du jour, a restless Quebecois whose thoughtful graphic narratives of extended stays in foreign locales first began washing up on anglophone shores in 2005, five years or so after he’d begun releasing them in the French market. Jerusalem, his latest graphic novel, builds on the strengths of his earlier works but adds in a layer of urgency due to the story’s proximity to violence and a greater complexity afforded by the length of the book.

Delisle structures his autobiographical excursions in short, easily digestible units that stand ably on their own. Jerusalem’s span necessitates a second scaffolding as the vignettes are grouped by months that slowly tick away as the book proceeds. While Delisle’s earlier works offered the reader an opportunity to follow him working as an animator in China (Shenzhen, 2006; see WLT, Mar. 2007, 65) and North Korea (Pyongyang, 2005), Jerusalem finds him attending to his children while his girlfriend works for Doctors Without Borders, as in The Burma Chronicles (2008). This arrangement offers both him and the reader more opportunities to interact with the location as he spends more time exploring its nuances and sketching its sights in his few free hours.

This devotion to his sketchbook pays dividends throughout the work. Delisle’s iconically rendered characters inhabit a world where the architecture and landscapes are reflective of their real-world counterparts and yet possess a designerly quality that communicates meaning to the reader more directly than that of a mechanical draftsman’s reproduction. The sum of Delisle’s detached observations and carefully metered visual narrative is a book that allows the reader to explore the territory without the ideological baggage often tagging along with a story like this. Delisle is not ignorant to the suffering that confronts him on his stay, but he presents it through an apolitical filter that sees it as a human problem rather than an ethnic or political one.

The graphic novel is certainly no stranger to the autobiography or the travelogue. In Guy Delisle, though, we have an exceptional creator who has delivered a stylistically consistent and topically timely body of work in under a decade. They constitute a major contribution to the body of vital graphic novels being published to a global audience right now. Jerusalem, the latest limb to spring from that corpus, is as close to a must-read work as any enthusiast of world graphic literature is likely to find this year.

Rob Vollmar
University of Science and Arts of Oklahoma