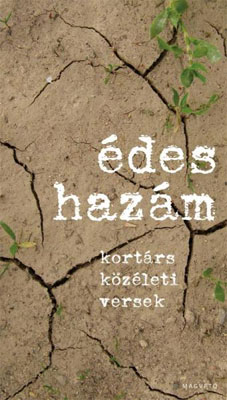 Hungarian poetry is traditionally more engaged than private. Poems like Sándor Petőfi’s “National Song” ushered in the March revolution of 1848, and Endre Ady became a mouthpiece of socialist ideas in the first two decades of the twentieth century. Both the interwar Horthy era and the thirty-three-year-long communist Kádár regime had its prominent social and political poet-rebels: Attila József and György Petri. When the latter emerged from samizdat in 1989 and anything could be published, it seemed that the days of political poetry were numbered, but this was an optical illusion—Hungary’s problems did not cease with the change of regime, and they had to be addressed by its poets. Tibor Bárány, editor of the new anthology Édes hazám (My sweet homeland), chose “engaged” poems from the output of the past twenty years. Although he stresses in his afterword that this is “not a representative anthology,” as the collection bears the imprint of one of the leading publishing houses in Hungary, it will surely be regarded as such. It certainly represents the taste of the editor (about whom, by the way, very little is known, since no information is given in the book).

The poems are arranged in sixteen cycles, or thematic parts. This is a peculiar arrangement, which tries to bridge (or conceal?) political differences. One can find out when and where the poems were first published in the volume’s bibliography, but it is still misleading to have a nonchronological arrangement. It is not the same whether a protest poem was published in 1991, 1996, 2006, or 2011, whether it was printed in Élet és irodalom, Mozgó világ, or Hitel, to mention just some of the politically quite different publications. For the key to the overbearing gloom and despair of most poems is how one assessed the political situation in that particular year. Also, while many pre-2010 poems bemoan social conditions or political polarization, the best protest poetry was written during the past two years of Fidesz rule, during which democratic rights have been systematically eroded and the legislature became the undisguised means to manipulate power relations.

That said, there are many excellent poems in this collection, starting from representatives of the older generation—Sándor Csoóri, Ottó Orbán, and the already mentioned György Petri (of the three, only Csoóri is still alive)—to younger ones, among whom this reader particularly liked the work of Balázs Szálinger and Virág Erdős. Most of the poems are informed by frequent allusions to Hungarian literary tradition, which reduces their translatability but makes them familiar and easier to connect with the experiences of contemporary native readers.

Two more things bear mentioning in connection with this intriguing anthology. Some of the wittiest and politically balanced poems in Édes hazám were written by Transylvanians, by the poet-politician Béla Markó, Ferenc András Kovács, and Péter Demény. The latter’s “Haza-szvit” may not be the best poem in the collection, but it is one of the most biting pieces in its irony and mordant self-irony: “I would be a Hungarian, but I am a Hungaroruin / instead of living I am Trianonizing” (Magyar lennék de rommagyar vagyok, / élet helyett trianonkodom). The latter expression alludes to the obsession with the unjust 1920 Trianon peace treaty, which has lately become the hallmark of the extreme right in Hungary. As for poetry written about their homeland by Hungarians living in western Europe and the United States, this collection is woefully underrepresented. Out of sixty-four poets, only two westerners found favor with the editor: György Faludy and Győző Határ. In this respect, there has not been much change since 1990, the year of the first free elections in Hungary.