In the Presence of Absence by Mahmoud Darwish 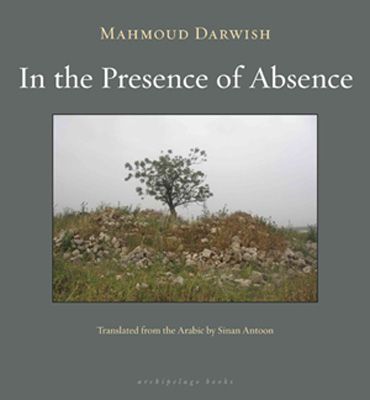 Mahmoud Darwish, who died in 2008, threaded themes of death and loss throughout his poetry of hope, resistance, and empowerment. He and his family were forced to leave their ancestral home in 1948 when Darwish was seven years old, and that moment marked the beginning of an exilic life spent recording into existence an obliterated homeland, its people, and himself. Between exiles, Darwish returned to his homeland—now in Israel—as a designated “present-absentee,” and it is this constant presence of absence—of a homeland, of self-determination, or even the legitimate right to exist—that Darwish returns to in his penultimate collection. This time he does so with a heightened emphasis on the craft and crafting of poetry and his poetic imagination to examine a lifetime spent constructing a “world . . . gradually born out of words” as a defiant space of permanence and celebration.

In the Presence of Absence is an intimate autobiographical self-elegy, and as in much of Darwish’s earlier collections, the poetry here is rich with allusions to Arabic literature, history, culture, and art, especially as they interact with the Hebrew Bible, Christianity, pre-Islamic cultures, and colonialism. This twenty-chapter narrative is almost entirely a hybrid of nonfiction and poetic-prose with a few occasional poems serving as chapter epilogues. Sinan Antoon, the collection’s translator, includes an impressive appendix in which he thoroughly and accessibly explains Darwish’s references and allusions, allowing readers insight into both Darwish’s writing process as well as Antoon’s approach to translating his work.

The overarching content is familiar and quintessentially Darwish: the book is a meticulous chronological record of major events that have defined contemporary Palestinian existence, from the Nakba and the Deir Yassin massacres in 1948, the Sabra and Shatila massacres in Beirut in 1982, to the failed Oslo Accords. For Darwish, writing was a cause, because otherwise, “Who will tell our story? We, who walk upon this night, driven out of place and myth.”

In every chapter, Darwish examines—as if holding his imagination in his hands, held up to a light—how powerfully his very existence was dependent upon and defined by his ability to create. In the poem about one of his imprisonments, for example, he captures this power: “The expanse of earth here is two meters, with a permanently shut iron door. . . . But you are free . . . to put imagination on your lap. . . . [N]othing in the cell distracts you from gazing at the black center that radiates light, so you sing to the light and fly, as a mystic does, farther than the hoopoe, to the ends of the question!” This exquisite mixture of metapoetry, autobiography, and politics makes the book a powerful work of art and resistance.

Mahmoud Darwish was laid to rest on a hill in the West Bank overlooking Jerusalem, his legacy transcendent and present in his homeland.