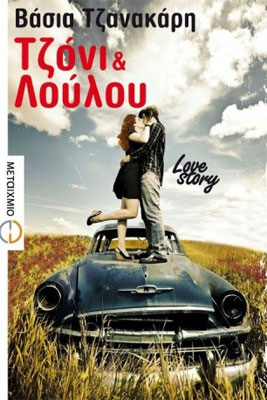 Vasia Tzanakari’s first novel, Tzoni kai Loulou (Johnny and Loulou), is a love story set in contemporary Athens during a time of crisis, unemployment, and despair. It begins as an urban story depicting the dark reality of contemporary Athens and continues as a road novel, following the protagonists’ long drive from Athens to Istanbul.

The author, born in 1980, belongs to the generation hit the hardest by the current economic crisis in Greece. When Tzanakari’s protagonist, Loulou, is abruptly fired from her job as a photographer for a lifestyle magazine, the world around her collapses. Her husband, Johnny, an engineer by training, is chronically unemployed, occasionally playing the piano in a bar. After three months of looking for a job, Loulou realizes that they are both not just unemployed but unemployable, part of a growing tribe of ex-middle-class creative people in their thirties, now wandering in an empty city with their dreams suspended. Johnny’s aunt proposes an escape out of scorching summer Athens: a friend of hers invites Loulou to photograph her new boutique hotel in Istanbul. So the journey begins in Johnny’s ancient blue Škoda; a journey in space but also in time, as Johnny and Loulou revisit their past, their childhood summers, their loneliness, and the sorrows of growing up. Their love story is played and replayed in their memory like the music tapes in the car’s cassette player, a soundtrack that combines Led Zeppelin, Jeff Buckley, and the Walkabouts with Greek popular music. Past and present come together and apart through Tzanakari’s skillful narrative technique, which also merges humor with emotion, songs with images: the ugly rest stops of the national highway, the promenade of a provincial city, the smells of insect repellent and zucchini fritters, the damp yellowish linen of an old summerhouse.

Tzanakari succeeds in capturing the angst of contemporary Greeks in their thirties without becoming melodramatic. The ambiguous ending of the novel does not answer whether love always withstands poverty, insecurity, and fear. Yet as a true follower of the literary tradition of romantic love that extends beyond reversals, limits, and even death, the author suggests that love may be our only escape and salvation.