A Difficult Woman: The Challenging Life and Times of Lillian Hellman by Alice Kessler-Harris 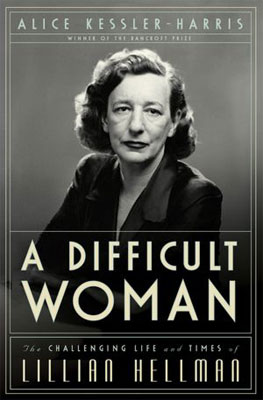 “Unless you are a pathological escapist, there must be some sort of propaganda in everything you write,” Lillian Hellman told an interviewer. Propaganda, she suggested, meant explicit advocacy of some moral position, some cause. She attributed her position not to any particular event, Alice Kessler-Harris writes, but to her moment in time. In 1961 Hellman told a Harvard audience that she belonged to a generation “too old to be Depression children, too young to have known the fun and brilliance of the 1920s.”

Kessler-Harris, a history professor at Columbia, writes not a conventional chronological biography, but a series of intertwined essays. Her chapter headings cogently define the myriad aspects of a tumultuous life: “A Serious Playwright,” “An American Jew,” “A Self-Made Woman,” “A Known Communist,” “Liar, Liar.” As a historian, Kessler-Harris interjects a perspective different from the four or five previous biographies of Hellman. She adroitly explores the economic, financial, and political strands of Hellman’s life, in addition to her artistic talents. As a political scientist, I especially found the author’s detailed and perceptive analysis of Hellman’s moral crusades and infatuation with communism during the 1930s and ’40s revealing.

Hellman, of course, perhaps the most successful playwright of her time, is remembered primarily for her plays: The Children’s Hour, The Little Foxes, Toys in the Attic. While arguing for social justice—at a time in the 1930s when $25 a week was considered an adequate wage for a family of four, a mediocre screenwriter earned $50, the more talented $200 to $1,000 a week—she earned $2,500 a week after the success of The Children’s Hour.

Like many intellectuals and artists in the 1930s, Hellman flirted with communism, joining the Communist Party USA in 1938 and remaining a member (by her admission) until 1940. Her naïveté and hypocrisy in politics seem not to have bothered her. In the 1960s she joined the public outcry against the Soviet show trials that sentenced two dissident writers to hard labor for criticizing the regime. She had done the complete opposite in 1938, when she signed a statement supporting the Moscow trials that condemned several writers to death.

Her reputation suffered in her final years when she sued critic Mary McCarthy for libel for her remark, “Every word she [Hellman] writes is a lie. Including ‘and’ and ‘the.’” Hellman died before the case went to trial.

In her memoirs, Hellman admits that she wrongly believed ideas she now rejected. “Whatever our mistakes, I do not believe we did our country any wrong,” she wrote in Scoundrel Time. The reader can decide. I highly recommend this book.