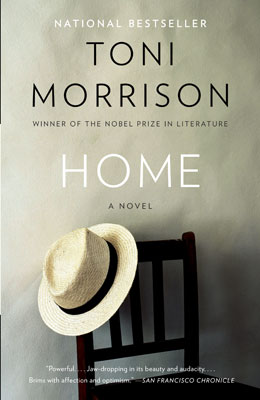 Since its release in May, Toni Morrison’s recent novel Home has been criticized for its brevity. With only 145 pages to boast, it departs from such monolithic works as Song of Solomon (1977; see WLT, Summer 1978, 465) and Beloved (1987; see WLT, Autumn 1988, 658), which, on account of their depth, not only have served to complicate the novel as a formal genre but also have helped us deconstruct standard notions about race, gender, and national identity. How does this stripped-bare book continue to offer a complex perspective of the black experience? In a TV interview, Morrison defends her writing style: “Sometimes my editor would say, ‘more.’ And I would say, ‘It’s just more. It’s not better.’” Poised and resolute, the Nobel Prize laureate claims she can write forever and about any character. But it seems this narrative—unlike her others—simply requires fewer words.

On the surface, we have an Odyssean homecoming story on a less-than-epic scale. Frank Money is a twenty-four-year-old Korean War veteran, traveling home to rescue his sister Cee from an unknown catastrophe. He receives an anonymous letter that reads, “Come fast. She be dead if you tarry.” In order to save his sister, though, Frank must revisit his Georgian hometown that he considers “the worst place in the world, worse than any battlefield.” He remembers from his childhood a black father and son pitted against one another in a ghastly fight to the death. And yet his hometown is not all that haunts him. A traumatic experience with a young Korean girl has left him broken, purposeless, and emotionally disturbed. The journey home, then, becomes not only an attempt to save his ill-fated sister but also a last-ditch effort to resuscitate his sense of manhood.

Any reader of Morrison knows the author by her strong female characters. Part of what makes Home refreshing is that it portrays a man’s near-broken spirit during the very heteronormative culture of the 1950s. Morrison appears to question our conventional notions of a pre–Civil Rights America. But in doing so, she also casts a worried glance at black masculinity. Frank’s subordinate rank on the front lines, for instance, seems to typify and reinforce dominant racial hierarchies. Despite the obvious risk in drawing a hasty comparison, we cannot quite forget that Morrison’s son recently died at age forty-five. In fact, his name, “Slade,” stands alone on the dedication page. When USA Today asked about the dedication, Morrison explained, “Sometimes you just don’t have any words. Sometimes it’s just clichés and tired old words, and there’s nothing really to say.” Both the dedication and the novel itself are poignant without much said. In a story that knows healing, Morrison succinctly teaches us the value and dignity in a life. We can look to a wishful epitaph, engraved by Frank, and smile: “Here Stands a Man.”